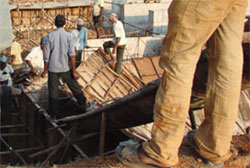 THE Indirasagar Polavaram Project in Andhra Pradesh is caught in yet another controversy. The reason this time is the alleged irregularities in the bidding process to construct parts of the mega dam on the Godavari river in West Godavari district. Questioning the awarding of contract, the high court on October 31 directed the High Powered Committee for tender approval to review the technical capabilities and expertise of the contending firms.

During the court proceedings, the state had said that the tender was not final. S K Joshi, principal secretary of the irrigation department and convenor of the High Powered Committee, says, “Only the first stage of bidding is over. In the next stage High Powered Committee will review recommendations of the technical evaluation committee.”

The court order came in response to a petition by infrastructure firm CGGC-Soma, against the government’s decision to award the Rs 4,717-crore contract to Southern Engineering Works (SEW) Infrastructure-led consortium. The contract is to construct four components of the project: the spillway, the headworks (structure at the diversion point of a waterway), earth-and-rock-fill dam and excavation for the power house. As per the government, SEW-led consortium was the lowest bidder among the four firms shortlisted for bidding. It quoted Rs 4,122 crore—12. 6 per cent less than the value of the work decided by the government. The petitioner CGGC-Soma quoted Rs 4,147 crore and emerged as the second lowest bidder.

In the petition, CGGC-Soma contended that the contract was granted in violation of the conditions stipulated in tender call. Patel Engineering, a member of SEW-led consortium, was blacklisted by the National Highway Authority of India for a year in May 2011 for financial illegalities.

Moreover, SEW-led consortium was not technically qualified to execute the project. First draft of the minutes of the meetings of the technical evaluation committee, leaked to the media, proves this. The committee had disqualified SEW-led consortium from bidding as it produced work experience certificates issued by private organisations, and not issued by Central or state governments or by government-undertakings.

The disqualified firm was included again in the bidding following pressure from Chief Minister Kiran Kumar Reddy, alleges the Telugu Desam Party (TDP), the main opposition party in the state. “The chief minister had acted as engineer-in-chief and finalised the tenders,” alleges TDP leader Ravanth Reddy. The chief minister denies the allegation.

The opposition also alleges that the government granted the contract to SEW to quell the sakala janula samme (general strikes) by groups fighting for a separate Telangana state. Soon after the SEW-led consortium won the bidding, Namaste Telangana, a newspaper backed by SEW, has started supporting the Polavaram project, says Ravanth Reddy.

This is not the first time the government has invited tenders for the Polavaram Project. It had awarded the contract for building the spillway and rock-fill dam in 2005 and 2007. The works were to be completed in 2009 but only 32 per cent of the work had completed by then. That year the government cancelled the contracts due to the slow pace of work. It called for fresh tenders in October this year after postponing it 17 times in the past two years.

Meanwhile, the cost of the works has more than doubled. This has pushed the estimated cost of the entire project from Rs 10,247 crore in 2005 to Rs 17,000 crore.