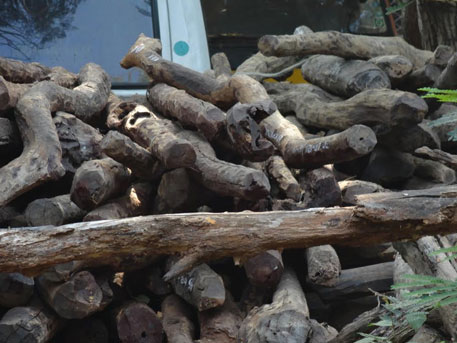 Tamil Nadu government on Wednesday announced Rs 3 lakh compensation to the families of those who were killed the previous day by a joint team of Andhra Pradesh police and forest officials. The shootout took place in Seshachalam forests of Chittoor district where a Special Task Force of Andhra Pradesh gunned down 20 persons alleged to be red sandal smugglers.

The officials, however, claim they opened fire in self defence. According to M Katha Rao, Deputy Inspector General of the STF, the task force and forest personnel, during a joint combing operation, spotted over 200 red sanders woodcutters involved in felling trees. When asked to surrender, the smugglers attacked the police with stones, sickles, axes and knives. Police claim that six of its personnel were also injured in the attack.

Meanwhile, the incident has incited strong protests in Tamil Nadu since most of those killed were from Vellore and Tiruvannamalai in Tamil Nadu. Protesters on the streets of Chennai attacked seven Andhra Pradesh Transport Corporation buses on Tuesday. Security has been stepped up at many Chennai-based establishments of` Andhra-origin owners—including restaurants, clubs and banks—after protesters tried to target them in separate incidents.

On Tuesday, Tamil Nadu Chief Minister O Panneerselvam wrote a letter to his Andhra Pradesh counterpart N Chandrababu Naidu strongly condemning the killings. Panneerselvam also called for a probe into the incident. "It is possible that these persons may have been engaged in illegal activities. However, the high number of casualties in the operation raises concerns whether the Andhra Pradesh Task Force acted with enough restraint," wrote the Tamil Nadu chief minister.

NHRC issues notice
Meanwhile, the National Human Rights Commission (NHRC) has issued a notice to the Andhra Pradesh government seeking a report on the incident. The commission observed that the justification of the Special Task Force that it was an act of self defence could not be accepted since it left 20 persons dead. In the notices issued on Tuesday to the Chief Secretary and the DGP of Andhra Pradesh, the commission has observed that the incident "involved a serious violation" of human rights of individuals.

The matter will now be taken up for hearing in a sitting of NHRC, to be held at Hyderabad on April 23. The Commission has also noted that a similar incident was reported from the area in December, 2014 where Andhra Pradesh forest officials were seen physically torturing a naked man, and reports were awaited from the authorities.

All the political parties in Tamil Nadu have come out against the killing. DMK chief M Karunanidhi says that both the governments should wake up to the situation and take necessary measures to prevent such incidents in the future.

Claiming that the victims  were  labourers from Tamil Nadu who were lured with higher wages for working in forests of neighbouring Chittoor, National Democratic Alliance ally and Pattali Makkal Katchi party chief Ramadoss says the shootout that was carried out without even an inquiry was unacceptable.