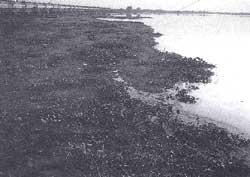 INSECTS that were introduced to stem the spread of water hyacinth are beginning to avoid feeding on the weed because they are polluted by toxic metals. However, the insects seem to be developing resistance to the toxicity by producing new cellular proteins and synthesizing new ones.

In experiments conducted by scientists -at the.Indian Institute of C210mical Technology in Hyderabad, water hyacinth (Eichhornia crassipes) plants were kept for a week in solutions containing various amounts of cadmium, zinc, mercury sad manganese. The maximum absorption of metals by the plants a=arred in the first 24 hours, after vMch the uptake was gradual. The accumulation of metals was Height in the roots, compared to Other parts.

The plants absorbed metals with No apparent deleterious effects. However, when very high concentration of metals were absorbed, the Leaves turned pale and plant growth was restricted.

When water hyacinth weevils (Neochetina eichhornae) fed on the plants they absorbed high quantities of cadmium and zinc but low amounts of mercury and manganese. Adult weevils that fed on contaminated plants did noi show any toxic symptoms - even when contamina- tion was high - suggesting they were able to develop mechanisms to resist metal contamination. The insects may have survived the toxicity by physiological avoidance, but prolonged exposure to the metals could result in genetic changes.

Studies showed the accumulation of metals in insects led to the disappearance of some normal proteins and the emergence of new ones. Scientists are unsure of the changes the new proteins,could cause but they may be responsibIq for metal detoxification by binding metal ions and rendering them less.harmful.

The scientists found high accumulation of chromium - found in plenty in wastes from dyeing, tanning, explosives, ceramics, textile, paint and paper industries - in the water hyacinth and the water lettuce. This led to increased respiration, yellowing of leaves and the inhibition of chlorophyll synthesis, affecting the process of photosynthesis.