The announcement that more cement factories will be set up in the state has unleashed a controversy. Units already operational have not controlled emissions and it is feared more plants will further degrade the environment and adversely affect tourism. 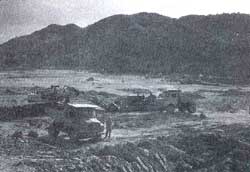 THE DECISION of the Himachal Pradesh governnment to set up four Large and 12 small cement plants in The state has unleashed a controversy pwite one Union minister lVAmother and arousing protests fonmentalists. Though Lwiories are listed by the of environment and as a major polluter, it plGaoarat Ambuja Ltd's major it in Darlaghat and is s looking favourably on ns for three more large S"ndarnagar, Chamba and Arki and 12 smaller ones.

Union minister for planning and Non-convensional energy Sukh Ram wrote to his cabinet colleague, environment minister Kamal Nath urging Ambuja clearance be revoked because the cement plant would pollute the air,"A state like Himachal Pradesh must always depend on eco-friendly industries for revenue and employment."

Sukh Ram's ire was aroused when the BJP government was announced at the foundation stone-laying ceremony of the Gujarat Ambuja plant that more such units would be set up.The forest department objected to the notification on environmental grounds and local villagers prosted, fearing displacement.

Amid the euphoria when Kamal Nath laid the foundation stone of the Gujurat Ambuja plant, few noticed the unhappy residents of Duaru village, who lost their land, to the project. "We do not have any land left," one of the villagers moaned. "Our fields have disappeared and the road has come close to our homes." The villagers maintain they did not give up land voluntarily, saying, "Dhamka ke hamse sign karaya gaya hai" (We signed under duress). The few lakh rupees in compensation has been reduced to small amounts after sharing among all the claimants and the promised land-for-land has not materialised. In Arki, residents have filed suit to block the pro posed cement factory of the Minerars and Metals Trading Corp (MMTC) contending it will destroy their forests and cause them immense been hardship.

Whether Sukh Ram's apprehensions are justified should be answered within the framework of how the state's two major cement plants operate. Both the Cement Corp of India (CCI) factory at Rajban in Sirmur district and the Gagal Associated Cement Co Ltd (ACC) unit in Bilaspur have come in for sharp criticism for failing to meet pollution standards.

But P K Kaku, deputy general manager of the ACC plant, contends, "We have geared all our efforts to work out a better environment management plan through systems design and systems improvement." He explained the anti-pollution devices - electrostatic precipitators (ESPs) that trap particulate matter in gases and dust bags that collect dust inside the factory - have been suitably modified.

Even so, the chimneys at the ACC plant and at Rajban continue to belch dense clouds, which coat the surrounding vegetation with a thick layer of white dust. Furthermore, ACC's claim that the emission level at its plant is well below the set limit of 150 milligram (mg) suspended particulate matter (SPM) per cubic metre and will drop to 100 mg SPM per cubic metre after complete plant upgrading, has not impressed the state pollution control authorities. They say emission levels around the ACC factory this summer were 380 mg SPM per cubic metre.

The company's defence in this matter is that it cannot prevent the ESPs from tripping because the coal used varies widely in ash content and quality, making it difficult to maintain thermal stability inside the kiln. And, CCI general manager M P Sinha argued, "Foolproof technology that can prevent tripping of the ESP does not exist in this country."

But S S Juneja, secretary of the state pollution control board, insists "ESPs can be maintained at 99.5 per cent efficiency, provided design quality is also maintained. In Europe, if the ESPs trip, which is rare, the entire production comes to a halt."


There have been complaints that cement plants do not operate their ESPs so they can save on costs. But ACC general manager S C Sachdev said this was not so because the plant can augment its revenue by recycling dust trapped by the ESP. "If we do not operate our ESPs," he said, "about 10 per cent of our cement production will fly out and, at current prices, this is valued at Rs 3 lakh a day." But to this, state pollution control board officials retorted, "Raw materials like limestone and clay are so cheap, they couldn't care less about recycling."

"Everybody focuses only on the factory chimney," pointed out ACC personnel manager Indrish Chandra. "What is not noticed is the unregulated development that takes place once a big project comes up and the auto and dust pollution that results from the plying of 2,000 or so trucks and other vehicles."

The victims of the pollution, however, have, a different tale to narrate. Villagers in the Rajban area complain that crops 'like chana and masoor pulses have disappeared completely from their village. "Crops shrivel up under the heavy coating of cement dust," said panchayat mem- ber Harbhajan Singh. "Even our old mango trees, which have a girth of more than six metres, have stopped bearing fruit. Now, we have to buy fodder because our grass has dried up and cattle that earlier gave 10 kilos of milk now barely give 2 kilos," he added.

Scientists at the agricultural university at Dhaulakuan in Sirmur district say. dust layers on leaves prevents pod formation in gram and linseed. There is evidence also that sal trees near the Raiban CCI factory have been affected by dust and the incidence of respiratory illnesses has increased since the CCI began operations.

A question that some have raised is whether mini-plants can substitute adequately for the large cement factories as the emission control technologies are either too expensive or not efficient enough. The 12 mini-plants in Himachal Pradesh are almost wholly concentrated in Sirmur district. Experts note that until recently plants with a 50-60 tonne capacity did rfot have appropriate technology sions. State pollution control board say small units were emitting upto 1,500 mg SPM per cubic metre, well above the norm of 400 mg SPM per cubic metre, which was revised and lowered recently to 250 mg SPM per cubic metre. The problem with miniplants is that the cost of ESPs is more than the total capital cost of the plant.

Juneja's call poses a financing problem because mini-plants cannot spend much on pollution control.The onus therefore is on the cement industry to prove that their devices really do clean harmful emissions.