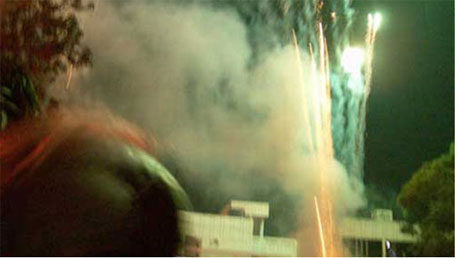 Data released by the Delhi Pollution Control Committee (DPCC) shows that Diwali pollution continues to be at dangerous levels. If not worse, it was nearly as bad as last year, says Delhi non-profit Centre for Science and Environment (CSE).

There is some dip in the average minimum and maximum levels compared to last year. But pollution level has seen rapid escalation beyond the standards and also very high short-duration peaks during Diwali night – leading to high exposure levels, says Anumita Roychowdhury, CSE’s executive director-research and advocacy and head of its air pollution team. It has called for a longer-term strategy to address this problem.

• SO2, which otherwise records very low levels of concentration in Delhi, has escalated beyond the standard

• CSE has also tracked the real time air pollution data reported in the official website of DPCC on the night of Diwali. This shows rapid build up of pollution after 5 pm and very high peak levels during the night. Calm weather with nearly no wind blocked quick dispersal of smoke and pollutants.

The pollution levels in residential areas, including R K Puram, Punjabi Bagh, Mandir Marg, and Civil Lines have recorded higher levels than IGI airport and Anand Vihar that are otherwise the pollution hot spots of Delhi. The crackers are burst maximum in residential areas, and such high levels of exposure can lead to escalation in hospital admissions related to respiratory and cardiac symptoms, warns CSE.

Need to phase in good practices quickly
Other countries have developed proper strategies to regulate bursting of fire crackers during celebrations and festivities. Public health is given a priority in these places.

Beijing and Shanghai: In order to cope with record smog, Beijing has issued an emergency plan to curb air pollution, including a ban on fireworks when the city sees three consecutive days of heavy smog. The city government recently introduced a regulation requiring people who buy five or more boxes of fireworks to register with an official ID; the city will halt fireworks sales entirely if the pollution rises to dangerous levels.

Shanghai cut the city's number of authorised firework sellers by 400. Pollution levels in Shanghai increased five times after the fireworks extravaganza marking the early hours of last year's New Year celebrations. The government of Hangzhou, a historic city near Shanghai, has cancelled its annual New Year fireworks display, a decade-long tradition. New techniques have been introduced for green fireworks. The new ones are made of special paper and without sulphur. After being lit, they emit less smoke and leave almost no scrap. All these fireworks are labelled.

United Kingdom: The Fireworks Regulation Act of 2004 prohibits the use of fireworks in England and Wales between the hours of 11 pm and 7 am, although extensions are given for certain special events. These regulations are enforced by the police and a penalty of up to £5,000 or six months in prison can be issued for a breach.

In several regions there is a growing trend towards community-based organised events that are restricted in numbers. This reduces household-based uncontrolled use of fire crackers.

Stronger awareness campaigns needed
Diwali pollution cannot be addressed only with command and control measures. It is important to step up campaigns by involving the medical community and putting out hard health evidences in the public domain to sensitise people about the harmful effects of fire crackers.

It is not enough to quibble over marginal changes in Diwali pollution from year to year. This requires strong community sensitisation as well as judicious mix of regulatory controls to protect public health, says CSE.

The ambient air and noise quality in India during Diwali festival: A review

Order of the National Green Tribunal with regard to noise and air pollution caused as a result of use and bursting of fire crackers, 30/10/2013