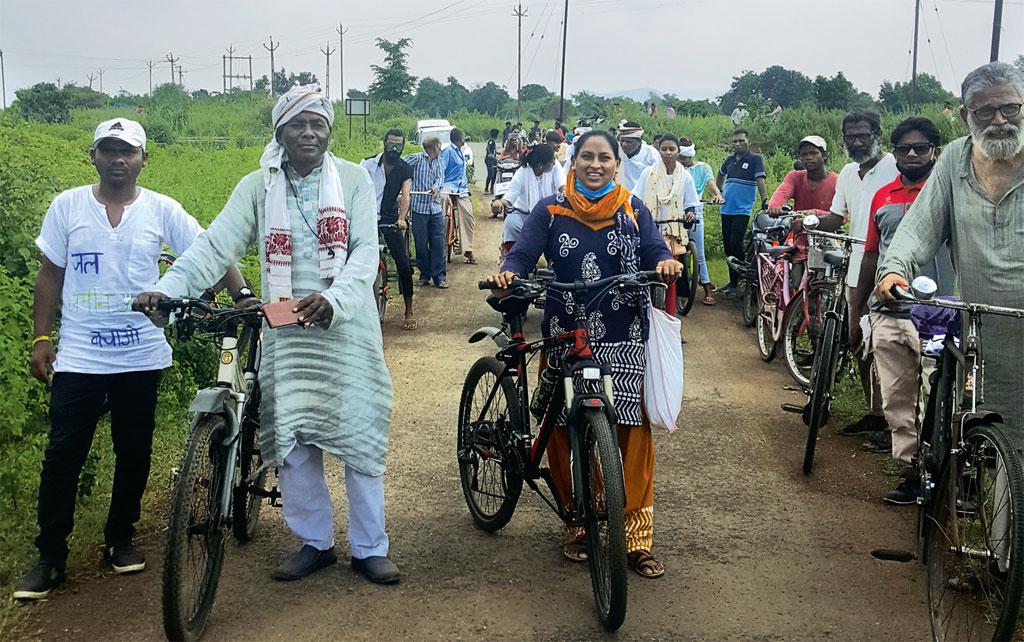 Adivasi bhai baba jaagta tumha rojara. This song in the Gamit dialect, which exhorts the tribal community of Gujarat’s Tapi district to stay cautious at all hours, became the anthem of a bicycle rally organised in October to make people aware of the harmful impacts of a zinc smelter planned in Doswada village.

In October 2020, Vedanta Group’s Hindustan Zinc Limited (HZL) signed a memorandum of understanding (MoU) with the state government to set up the smelter, touted as HZL’s largest, with a capacity to produce 300 kilo tonnes of zinc ingots a year. The ingots are mainly used for galvanising steel to protect it from corrosion and for making alloys.

Residents of Doswada and surrounding villages in the Songadh taluka allege the smelter has been planned without their permission. More than 80 per cent of the residents in Songadh belong to the Gamit, Chaudhary and Vasava tribal communities that depend on agriculture and animal husbandry for a living. They say the project would severely affect their health, environment and livelihoods.

“The district administration tried to slyly organise a public hearing for the project on July 5 this year, when gatherings were prohibited because of the novel coronavirus disease,” Lalsingh Gamit, a resident of Songadh, who is part of tribal activists group Adivasi Ekta Parishad, alleged.

“The authorities sent us the notice barely 20 days prior to the hearing. They did not share with us the environmental impact assessment (EIA) report for the project and asked us to study it at the district collector’s office instead,” Lalsingh said.

Soon after receiving the notice, 16 Gram Panchayats passed a resolution rejecting the project. On the day of the public hearing, the district administration cancelled the meeting after 5,000 people from these villages staged protests at the office of Gujarat Industrial Development Corporation in Doswada.

Residents now hold rallies and awareness campaigns along with activists from other areas. One of rallies was participated by the Dongria Kondh tribals of Odisha who have succeeded in stopping Vedanta from mining the Niyamgiri hills for bauxite.

So far, at least 42 of the 47 gram panchayats located within a 10 kilometre radius of the proposed project site have passed resolution rejecting the zinc smelter.

Sheela Gamit from Doswada says she has seen videos of pollution from Vedanta’s plants in other states. “I grow sugarcane, pulses and vegetables on my half-a-hectare (ha) field and sell 10 litres of milk to the dairy cooperative in the village everyday. It earns me Rs 4-5 lakh a year. If the toxic effluents from the company destroys our agriculture, who will compensate for it?” she asked. Her fear is not unfounded.

To assess the impact of the proposed zinc smelter on surrounding areas, a fact-finding team of 25 activists and residents from Tapi visited Rajasthan in June to inspect villages around HZL’s mine and smelting complexes in Rajsamand and Udaipur districts.

“An HZL employee at Rajsamand told us that he has been diagnosed with high levels of lead in his blood,” Suresh Chaudhary, a surgeon in Vyara town and a part of the team, said. The team also visited the 240-ha tailings pond in Dariba, where the company dumps its sludge. 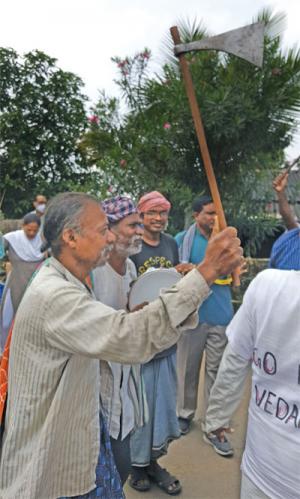 “Effluents from the pond have leached into fields and destroyed crops. We saw stunted maize plants; farmers say the yield has reduced to four sacks per beegha (0.25 ha) from seven sacks,” Pramila Gamit of Chapaldhara village, also a member of the fact-finding team, said.

“Water from hand pumps and wells within the 10 km radius of the plant has turned to the colour of tea. It is no longer potable and animals have died after drinking it,” she added.

Activists said the situation will be no different for Songadh if the smelter comes up. During smelting, HZL will also recover heavy metals like cadmium, mercury, copper, lead, nickel and cobalt present in zinc ores.

“Cleaning the metal produces impurities, which the company claims will not be released into the atmosphere. But this is difficult to believe given Vedanta’s track record, particularly at its zinc smelter in Rajsamand, Rajasthan; its copper smelter in Thoothukudi, Tamil Nadu and its aluminium refinery in Lanjigarh, Odisha. All of these have contaminated rivers and fields,”  Sanghamitra Desai Gadekar, a physician and an anti-nuclear activist with Sampoorna Kranti Vidyalaya (SKV), a Gandhian institution in Vedchhi village, said.

“In Japan, cadmium poisoning through paddy fields led to the notorious Itai-Itai disease that afflicts the spine and joints (Cadmium is a water-soluble heavy metal and sticks to roots of plants). Lead, another byproduct, can severely impact children’s mental and physical development. Then there is Minamata disease, a neurological condition caused by mercury,” Sanghamitra said.

Activists are particularly agitated because the smelter is being planned not to meet the domestic demand, but to cater to the international market.

According to the Environment Impact Assessment report, India’s current supply is sufficient to meet the existing demand. The projected demand of 827 kilo tonnes in 2025 will also be less than the projected supply of 837 kilo tonnes.

The project’s EIA report says, “The deficit in the international market during the upcoming years provides opportunities for export”.

The company is setting up a plant here only because of easy access to water, highways and ports, alleged Dileep Gamit, a trade union leader from Doswada.

In a press statement, HZL claimed that the plant will be among the lowest costing smelters in the world.

There are also discrepancies between the facts mentioned in the MoU and the EIA report. Even though the MoU says the plant will produce 300 kilo tonnes a year of zinc ingots, the EIA bases its calculations of water and electricity requirements on a production of 350 kilo tonnes a year.

While the EIA states that no hills or monuments are present within a 15-km radius of the plant, several hills can be seen in close proximity to the site. Songadh fort, an important archaeological site, also falls within the plant’s 5-km radius.

HZL further claims that the plant will operate with “zero discharge technology” and no wastewater will be released outside. According tothe EIA, the project will generate 12,300 kilo litres a day (KLD) of wastewater and consume 11,070 KLD of the treated water.

A spokesperson for the company told Down To Earth what it would do with water used in the smelter:

Based on the best industry practices and Hindustan Zinc’s expertise, over 90 per cent recovery has been considered in wastewater treatment plants. The 10 per cent of the remaining water (ie 1,230 KLD) will be lost during the treatment of wastewater in the form of evaporation or contained in salts or solid waste generated in the water treatment process. This plant is based on Zero Liquid Discharge employing ETP followed by double stage RO and MEE / MVR plant which ensures there is no liquid waste. The treated water (11,070 KLD) will be 100 per cent utilised in process and horticulture activities. The company remains in full compliance with all state and central laws and is committed to the development of a technologically advanced, zero liquid discharge and state of the art smelter for the state of Gujarat.

Surendra Gadekar, physicist and anti-nuclear activist, also from SKV, said over 1,230 kilo litres of water every day cannot evaporate as steam. This raises doubts that the company may dump the wastewater in the Mindhola river or Doswada reservoir that are adjacent to the proposed plant, he added.

Activists also refuse to believe the claims of HZL spokesperson who said “the proposed project is adopting the latest technologies for environmental management that ensures solid waste is productively used and not discharged outside the plant”.

Surendra said the plant, according to its EIA report, will produce 664,000 tonnes per year of sulphuric acid by utilising sulphur dioxide (SO2) emissions from the smelter and its captive power plants.

The government in its terms of reference letter to HZL has granted permission to generate not more than 700 gm of SO2 per tonne of sulphuric acid. But at this rate, it has been permitted to emit 464 tonnes of SO2 per year.

These emissions will come down as acid rain and destroy the crop and grasses, as seen in the US, China and Japan, Surendra said. He informed that HZL has an MoU with Chennai-based Lidia Agro Products Pvt Ltd to recycle 210,000 tonnes per annum (TPA) of fumer slag, 100,000 TPA of gypsum and 425,000 TPA fly ash and bottom ash for manufacturing cement gypsum boards and fertiliser application.

“What will an agro company do with solid waste from a zinc plant? HZL claims to be zero waste by handing over its waste to a recycler,” he added.

A closer examination of the EIA also shows that 3,100 of the 5,000 jobs the plant promises to generate are for the construction phase. Only 1,650 jobs are of permanent nature. “All those jobs will go to people from other regions as few from Songadh have the kind of education required by the company,” Haresh Gamit, a tribal youth leader, said.

These concerns strengthen the resolve of people in Songadh to not to allow the smelter in the first place.