Plastic waste being dumped in a landfill. Photo: Getty Images

For more than a decade, the United States (US) and other Western countries were foisting their plastic waste on China. This continued till January 2018, when China enacted the new ‘National Sword’ Policy of refusing 24 kinds of foreign waste including plastics into its jurisdiction.

This created a momentum for much-awaited conversations with respect to domestic recycling infrastructures and recycling markets worldwide. Estimates reveal that by 2050, the total volume of plastic ever produced will reach 34,000 million tonnes which will represent 20 per cent of all oil production and 15 per cent of the world’s total carbon budget.

According to a recent report by the Global Alliance for Incinerator Alternatives (GAIA) titled Discarded Communities on the Frontlines of the Global Plastic Crisis, there has been a drastic decrease in the import of plastic waste in China (50 per cent) by the end of 2018, when compared with 2016 levels. In 2016, China imported 51 per cent of the world’s recycling products, mainly from the US and Europe.

Due to this ban, the re-routing of plastic waste from the developed to less-developing nations, especially Southeast Asian ones, has increased tremendously (represented in the illustration below), where the impacts are manifold and the potential to safeguard is minuscule. 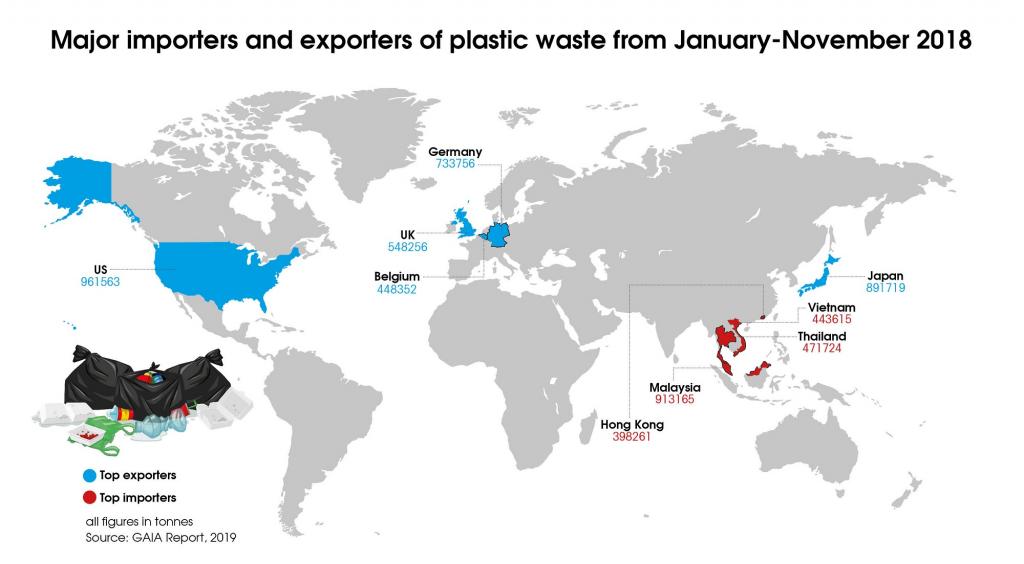 The report further finds that the global annual plastic production has increased from 2 million in 1950 to 381 million in 2015, which signifies 2.5 times the compound annual growth rate of the global gross domestic product for that period. It also notes that only nine per cent of the plastic produced globally since 1950 has been recycled, and argues for the recyclability of plastics.

Through these GAIA findings, the two key stakeholders responsible for plastic waste management namely, companies and the public, are compelled to re-assess the products and packaging that were previously assumed to be recycled.

Plastics, which are more difficult and expensive to sort and have toxic additives like Polyvinylchloride, Low-density polyethylene, Polystyrene and Bisphenol A (BPA), are now exported by the US and Europe to Malaysia, Indonesia and Thailand — the narratives of which are briefly discussed below.

The Southeast Asian country which occupies parts of the Malay Peninsula and the island of Borneo, receives plastic scraps from the US and Europe at the Klang port on the west coast of Peninsular Malaysia. In 2017, the Ecology Center (a hauler in Berkeley, California) tracked bales of mixed PET and BPA non-bottle plastic recyclables, and found these wastes were being mostly absorbed by the complicated web of brokers and middle men in the US and were finally dumped in the Arab-Malaysian Industrial Park, just south of Kuala Lumpur.

Most of the non-recyclable plastic scraps in the country are managed by the informal sector and are incinerated in the open due to which dioxins, furans, mercury and polychlorinated biphenyl are released in the ambient air, impacting agricultural fields and fruit ripening. Health ailments like respiratory and skin rashes are frequently diagnosed among affected individuals.

Realising these human and environmental hazards, the Malaysian government in October 2018 announced a permanent ban on importing plastic waste by 2021, and it took two months for the delegated officers to locate and identify 104 illegal operators (most of which only opened after the China ban) in the country.

As a result, the Malaysian government on January 23, 2019, sent notifications to shut down illegal recycling factories across the country. Some 44 companies were charged with offenses under Malaysia’s Environmental Quality Act 1974, with fines totaling to 3 million ringgit, or about US$740,000. However, a report by The Straits Times in March stated that illegal recyclers still continue to find their ways around the ban in the country.

The country which is known for tropical beaches has seen the largest percentage increase of foreign waste imports — about 1,000 per cent — from the previous year. Imported plastic waste enters Thailand by way of the deep water port at Laem Chabang. The lowest-grade of wastes, which are difficult to process, are dumped in places like the village of Kok Hua Khao in Chachoengsao.

As a result, the livelihoods of vegetable sellers in the region are heavily impacted, as they are now able to makes 100,000 Thai baht less per year (about US$3,000) and can no longer water the grass and feed hay to their cows. Further, impacts of plastic pollution on human health namely pulmonary ailments and chromosomal disorders, are frequently reported by residents of the region.

Owing to this reason, the Thai Deputy Prime Minister ordered the Ministry of Natural Resources and Environment, the Interior & the Industry Ministries and others to put an immediate ban on hazardous waste trade across Thai borders.

The Southeast Asian nation which is made up of thousands of volcanic islands and is home to hundreds of ethnic groups, is no different in experiencing the consequences of plastic waste trade across its borders. Ecoton (a GAIA partner organization in East Java), estimates that the country receives nearly 60–70 per cent of imported paper for recycling, which is contaminated with plastic waste.

To mitigate its impact, the districts around paper recycling factories are surrounded by a corresponding plastic industry to treat the paper. As a result, pollution from one sector to the other is shifted, with the most vulnerable communities — villagers — being severely impacted.

Before China’s ban, Indonesia’s plastic scrapping industry was concentrated in North Sumengko. Post-ban, it has expanded into Karawang, Sumengko, Bangun, Gresik and Surabaya. Incidents like the burning of cheap imported waste plastic to heat the boilers in the manufacturing of tofu, near Gresik and Surabaya are now a common practice in the region.

And if this continues, it is expected that in the years to come, Indonesia will become another China, as the Indonesian government has yet to take action against the incoming scourge of plastic waste.

Initiatives triggered across the world due to China’s ban

Because of China’s enactment of the National Sword Policy, transboundary shipment of plastic waste has acquired greater importance across the globe. In July 2018, Vietnam stated that it would no longer issue new licenses for waste imports, and would crack down on illegal shipments of paper, plastic and metal. Additionally, by April 2019, Vietnamese officials announced that they would bar all imports of plastic scrap by 2025.

Similarly, in October 2018, Taiwan opposed the rise in plastic scrap imports, and outlined regulations sharply limiting the types of plastic waste allowed into the country. In March 2019, India too made its ambitious plan to ban scrap plastic imports.

Developed regions like the US and Europe also took immediate measures to increase public awareness regarding reduction in plastic consumption. For instance, in March 2019, the European Union (EU) passed a legislation to ban single-use plastic products which mandates that producers are financially responsible for the clean-up of certain wasteful products.

Recommendations of the GAIA report

With an intention to weave the roadmap for sustainable transboundary movement of plastic waste, important upstream measures like phase-out on single-use plastics, elimination on export of plastic waste to other developing nations and global implementation of Extended Producer Responsibility (EPR) are mandatory to be considered.

Developing nations are strongly encouraged to make robust legislations for imposing bans on importing plastics from the developed world. Exporting countries should establish and upscale domestic recycling for their plastic waste.

To combat worldwide plastic pollution, private sectors are encouraged to redesign products, packaging and delivery systems that prohibit single-use plastic products, and are expected to take financial responsibility for managing post-consumer waste. Local and national government should prioritise source reduction via banning single-use plastics, mandating EPR, banning toxic additives etc. Rights for waste handlers and recycling workers should be formulated and implemented by the concerned government authorities at national level. Banning and monitoring of plastic waste incineration should be strictly carried-out by the government officials.