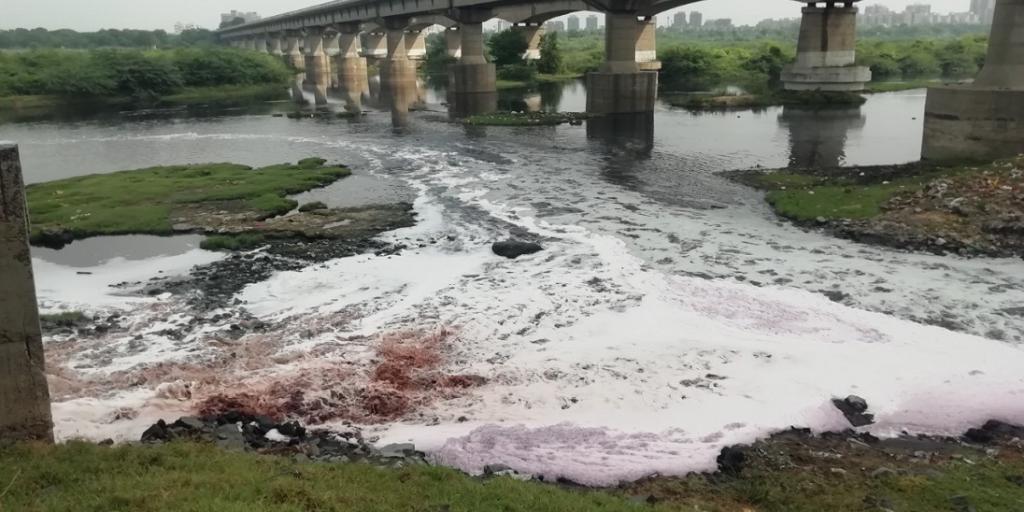 Partially treated effluents and sewage being discharged into the Sabarmati at Vishala Bridge in Ahmedabad. Photo: Krishnakant

Industrial units found to have discharged pollutants into the Sabarmati river in Gujarat will not be provided water and power. They will also be penalised, named and shamed, the Gujarat High Court said in a recent order.

All such polluting units will also be banned from participating in any industrial fair, public-private partnership events, etc, the court added.

The two-judge bench of Justice B Pardiwala and Justice Vabhavi D Nanavati had taken suo motu cognizance of the slow death of the river due to effluent discharge.

The bench also issued notice to Gujarat Industrial Development Corporation (GIDC) and made it a party in its order issued September 23, 2021. The order was uploaded onto the court’s website September 30.

The court asked amicus curiae Hemang Shah to serve the notice to GDIDC at the earliest. The bench has sought a response from GIDC by October 21.

“In our Constitution, water resources are held in public trust. We have to use the ‘Public Trust Doctrine’ to apply stringent provisions against permitting municipal bodies or industries from polluting rivers,” the bench said in its order.

Rivers are our lifeline since we are completely dependent on them for our existence. The major reason behind this alarming situation is our utter ignorance and carefree attitude towards our environment and maintaining rivers and riversides. So, it is high time that we take some stringent actions in this regard.

“It is very sad that rivers have become a common pool for pollution for all,” the bench said.

The statements came after the Gujarat Pollution Control Board (GPCB) stated September 23 that the Ahmedabad Municipal Corporation (AMC) should be held squarely responsible for the pollution in the Sabarmati.

The GPCB noted that the AMC had allowed industrial units to discharge effluents into a major pipeline that was constructed to discharge storm water and other clean water into the river.

The AMC had given permission to units on the condition that the discharge would be done on the basis of the GPCB guidelines. However, the GPCB said the AMC had not consulted it even once about its decision and its action was thus unilateral.

However, noted Gujarat-based environmental activist Rohit Prajapati told the court that ETPs and CETPs were not working properly and effluents were being directly discharged into the river.

Prajapati is a member of the Joint Task Force (JTF) constituted by the high court September 19, 2021, to supervise and inspect the matter. The first meeting of the task force was held September 22.

Prajapati had told the court September 23:

The Sabarmati, for 120 km of its 371 km course, is in its death throes. This is especially true for the stretch of the river along the Sabarmati riverfront in Ahmedabad. The excessive presence of pollutants in the river and the lack of natural flow has done irreparable damage to the river.

“Effluents and sewage from industrial units are continuously being discharged into the Sabarmati river. Despite all this, industrial units have been provided legal permission to carry out these activities,” Prajapati said.

The Sabarmati originates in the Dhebar lake situated in the southern part of the Aravalli range in the Udaipur district of Rajasthan.

It flows in a south-western direction, passing through Udaipur in Rajasthan and Sabarkantha, Mehsana, Gandhinagar, Ahmedabad and Anand districts of Gujarat. After traveling about 371 km, it falls into the Gulf of Khambhat.

The court has directed the JTF to undertake site visits, preferably during the first or second week of October 2021.

The JTF team has to submit a report through the amicus curiae before the next date of hearing. This is to be done after inspection, collection of samples and examination.

The court has also ordered the JTF to conduct a performance check of the ETPs and CETPs in the area. Members shall hold a meeting with all organisations running existing CETPs.

Such organisations shall be made aware that if they fail to overhaul, update and maintain their existing CETPs, such CETPs shall be shut down until the source of release of the untreated effluent is detected.

The bench mentioned in its order that stopping pollution was everybody’s collective responsibility.