Faith to filth: Thanks to Kumbh, Prayagraj sinks in solid waste

A city that celebrated the festival of faith months ago, is on the verge of an epidemic

The 240 million people who thronged Prayagraj to take a dip in the river Ganga between January 4 and March 14 this year, were presented a “swachh” picture of Ardh Kumbh. It was the cleanest ever in the history of modern India, said Prime Minister Narendra Modi. The Union and Uttar Pradesh governments spent a massive Rs 4,200 crore to organise the world’s largest gathering of faith. But faith and filth don’t go together. On April 22, the National Green Tribunal (NGT) said Prayagraj was on the verge of an epidemic and must be dealt with “on an emergency basis”.

The Kumbh Mela generated more than 2,000 tonnes of unsegregated solid waste. This was dumped into the city’s only solid waste treatment plant at Baswar village. This, despite the fact that the administration knew the plant has been closed since September 2018. The waste now lies in the open—untreated and uncovered. The NGT order was based on the report submitted by retired judge Arun Tandon, chairperson of the supervisory committee set up by the tribunal to review how Kumbh had affected the Ganga.

When Down To Earth (DTE) visited the plant at Baswar, about 10 km from the city, a mountain of untreated solid waste stood behind the boundary wall (see photograph). Anil Kumar Shrivastava, representative of Hari Bhari, the private firm engaged by the Allahabad Municipal Corporation to treat waste, did not allow DTE to enter the premises. But at the back of the plant, a huge cavity in the boundary wall clearly revealed how it was making way for untreated waste to fall directly into the nearby Yamuna river, which finally flows into the Ganga. 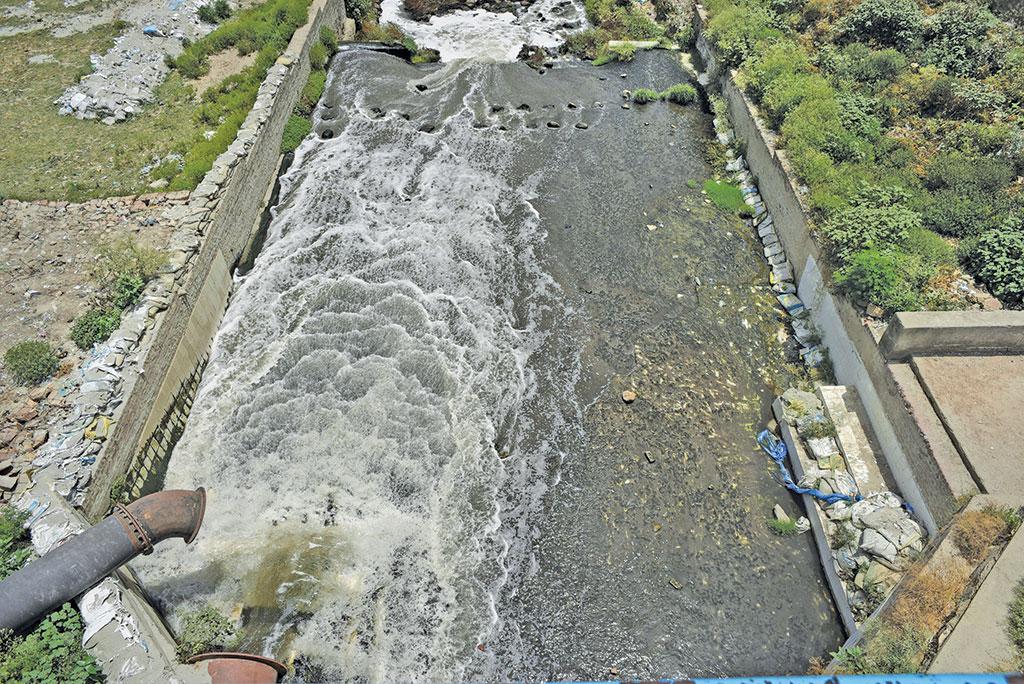 A worker, on condition of anonymity, admitted that the plant had not been functioning for several months. “It functions only when a government official comes for inspection,” he said. Municipal Commissioner Ujjwal Kumar vehemently denies that the plant ever stopped functioning, but official letters expose facts. The supervisory committee’s report quotes a letter of the Uttar Pradesh Pollution Control Board (UPPCB) member secretary asking Hari Bhari why the plant stopped working. In reply, the agency stated the plant was receiving 600 tonnes of waste per day (TPD) when it had been contracted to treat only 400 TPD, and was, therefore, unable to treat all the waste.

Dumping waste in a non-functional plant is the “grossest violation” of its order, says NGT. Before the Mela began, the plant already had 60,000 tonnes of waste to treat. Vijay Kiran Anand, district magistrate for Kumbh, says Hari Bhari is at fault as it was given funds to treat this existing waste. He denied the claim that the plant was getting more waste than its capacity.

Amidst the official blame game, growing waste in the plant is making life difficult for the people of Baswar and nearby Thakuripurwa, Mohabatganj, Bongi and Simta villages. “Flies and mosquitoes buzz all through the day making it impossible to eat at home,” complains 40-year-old Chandkali of Thakuripurwa. “From skin rashes to stomach aches, we suffer all kinds of illnesses,” says Vijay Kumar, resident of Baswar. “We are dreading the forthcoming monsoon when the rains will bring waste from the plant straight into our homes,” he says. Threatened by health problems, a school and a college have already closed. 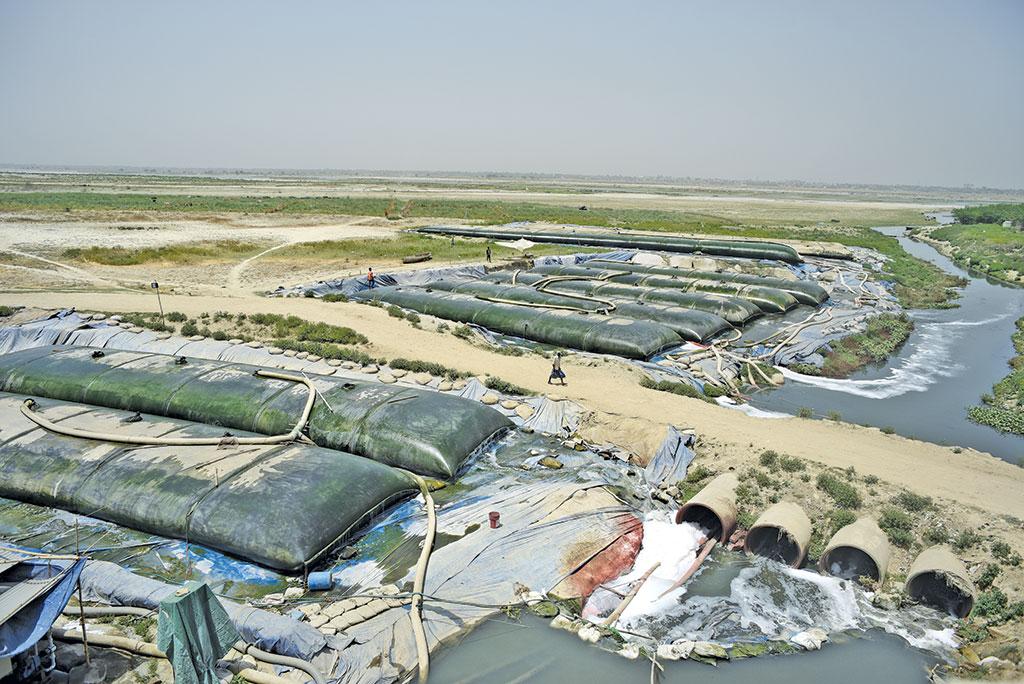 IT’S DISCONCERTING that the Baswar plant is not the only case of pollution norms violation. Most of the sewage treatment plants (STPs) in Prayagraj are overflowing and sending untreated sewage into the Ganga, making it unfit for taking bath. The NGT order states the supervisory committee inspected the STP at Rajapur on January 11, 2019 and found that the plant was getting much more sewage than its capacity to treat waste. “On reaching the Salori STP, the committee noticed that the 29 MLD plant was not working satisfactorily,” the order states. A fact-check from the Ganga Pollution Control Unit (GPCU), Prayagraj, reveals that all the STPs except the one in Naini were overflowing during Kumbh.

In January, Rajapur STP received 86 million litres per day (MLD) waste and 90.78 MLD in February against its installed capacity of 60 MLD. The Numayadahi STP, which has the capacity to treat 50 MLD waste, received 65 MLD in January and 65 MLD in February. Salori STP got 40.76 MLD in February against its capacity of 29 MLD. The plants at Kodra and Salori were also overflowing. It’s not rocket science to understand the water in which pilgrims coming from across the country and abroad were taking the holy dip, was filthy.

TRASHING TALL government claims, NGT found the big ticket geotube technology installed to treat sewage waste from the Kumbh was a complete waste of money. “A massive Rs 25 lakh is spent per day to treat 50 MLD of sewage water,” says P K Agarwal, GPCU general manager. The technology involves treating waste water with polymers and power activated carbon. This is then sent inside 50 metre or 25 metre bags, or geotubes, where waste is filterd using membranes, and solid waste gets collected inside the bags. This is then discharged into the river.

Experts doubt if the technology is effective at all. “Polymer and power activated carbon reduce odour. The technology serves no other purpose. It can treat only solid waste, not dissolved BOD,” says Nek Ram Rawal, associate professor at M N National Institute of Technology, Prayagraj. Before spending the money, the government should have run a pilot project to ascertain how effective the technology is.

Be that as it may, geotube technology has been installed at only five of the 85 drains flowing into the Ganga. Even here, not all the waste water is treated before it is discharged into the river. At the Rajapur drain, “50 per cent of the drain waste is permitted to enter the Ganga without treatment,” the NGT rules. No one from Ingeo Contractors, the agency treating water through this method, was willing to comment. A worker requesting anonymity said, “The drain discharges 27 MLD waste, while we have tender for only 18 MLD.” The situation is the same at Arail, Loteyharan and Salori drains. GPCU data shows the BOD levels at Rajapur, Loteyharan, Salori and Arail drains are far beyond the limits set by the National Mission for Clean Ganga.

The Municipal Commissioner once again denies the bypass. Officials also feign ignorance about the burning and covering mounds of waste that DTE found lying in the 3,200 hectares (ha) of Kumbh Mela area. “Waste from Kumbh was removed using GPS-monitored vehicles,” claims Anand. Adding to the woes are the ponds created on the banks of the river to collect dirty water during the Mela. The ponds were not lined with plastic sheets below allowing dirty water to seep into the river. The NGT order states that the supervisory committee found dirty water from toilets, built on the banks of the Ganga, was being collected in kuccha pits. This, too, was going into the river.

While the NGT order trashes the government’s cleanliness claims, Rawal says monitoring would become a lot easier if people living in the vicinity report the clearly visible discrepancies to the authorities.