Marina Beach, Chennai, one of the beaches surveyed for the study. Photo: Wikimedia Commons

A study on the health of urbanised tourist beaches along the southeastern coastline of India has revealed that many of these popular beaches are now facing the threat of different types of environmental pollution, of which, heavy metal pollution from both natural and anthropogenic sources is emerging as one of the potential threats.

A team of researchers led by the National Center for Polar and Ocean Research (NCPOR) conducted a study around three popular urban beaches in Tamil Nadu, namely the Marina Beach, Edward Elliott Beach and, Silver Beach.

They analysed sediment samples for concentrations of heavy metals like iron (Fe), zinc (Zn), copper (Cu), manganese (Mn), nickel (Ni) and, lead (Pb). Though the concentration level of these heavy metals was found to be under the safe limit defined by the Bureau of Indian Standards, the researchers expressed their concern that long term exposure to these heavy metals would have an adverse effect on the marine biota.

The research team suggested governmental intervention to strengthen and enforce stricter environmental laws to stop illegal anthropological activities to stop heavy metal intrusion into these beaches through a different type of wastewater seepage.

The term ‘heavy metals’ usually refers to naturally occurring elements with a density greater than 5.0 g cm-3. Toxic heavy metals such as nickel (Ni), cadmium (Cd), mercury (Hg), lead (Pb), copper (Cu), manganese (Mn), arsenic (As), chromium (Cr), iron (Fe), and zinc (Zn) have the potential to cause serious marine ecosystem problems due to their persistent nature in the environment, toxicity and ability to enter the food chain.

Even the presence of excessive amounts of essential metals / elements beyond their acceptable limit can have a toxic effect interfering with the aquatic ecosystems.

Heavy metal pollution of aquatic environment can be detrimental to human health also as people consuming contaminated seafoods would be suffering from the same ill effects of toxic heavy metals. This can lead to the damage of the multiple organs causing diseases or even death.

When the benthic organisms come in contact with them, these toxic elements intrude on the entire benthic food chain. Therefore, eco-health of the aquatic sediments has always been considered as one of the precursors to understand pollution in the aquatic ecosystem.

In the study conducted by the scientists in Tamil Nadu covering three prominent urban beaches, it was found that Ni, Co, Zn, Mn, Cu, and Cd posed a lower ecological risk than Pb (Lead) at all the three locations. Pb was found to be present in the sediments with a moderate level of ecological risk.

Besides, scientists found that the trace amounts of metals are not sufficiently toxic to harm someone walking along the seashore, but the ‘accumulative stress’ on the marine ecosystem cannot be ignored just because they are not in higher quantity. Their persistent presence may be an indication of industrial effluents, domestic sewage, and agricultural run-offs going into these beaches.

For example, the results of the present study confirmed that arsenic (As), cadmium (Cd), copper (Cu), mercury (Hg) and zinc (Zn) are the five metals that entered the marine environment of these beaches from agricultural activity. However, other heavy metals such as nickel (Ni), chromium (Cr), and lead (Pb) found in the sediments of these beaches are primarily from industrial wastes through river mouths.

Iron (Fe), manganese (Mn), and cobalt (Co) found in the beach sediments are however believed to be from natural weathering processes with mild anthropogenic influence. The use of leaded petrol and chromic anti-biofilling paints in beach environments is believed to be mildly influencing the increase in lead (Pb). The research authors emphasised the necessity of regular pollutant monitoring in the marine environment. 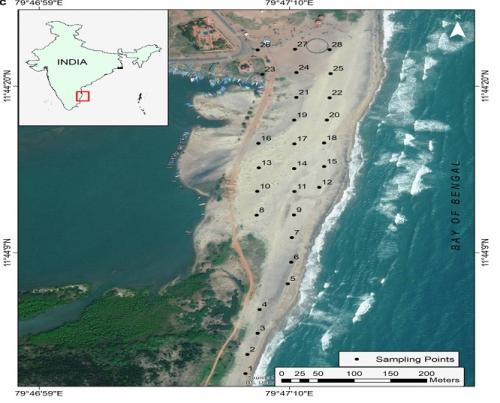