A new report by Delhi-based non-profit Centre for Science and Environment (CSE) has called for incentivising coal-based power plants that comply with revised pollution norms and penalising those that don’t.

Meeting Emission Norms: CSE working paper on penalty and incentive mechanisms for coal-based power plants will be released in a webinar October 21, 2020.

The report deals with the concept of ‘first-run’ that incentivises cleaner power stations to run on priority. “This could serve as a spur and bring in urgency in the coal-based power sector to abide by the 2015 emission standard deadlines,” the report says.

The Indian government has taken a number of measures to encourage clean power generation. It has, for instance, asked for the scheduling of renewable energy generating plants on a compulsory basis irrespective of their cost.

The Electricity Act, 2003 under Section 86 (e) asks the state electricity regulatory commission to ensure distribution companies purchase the quantity of electricity that they (renewable energy companies) produce to satisfy demand. Accordingly, the state and central electricity grid code regulations have incorporated such clean plants as ‘must-run’

Coal, however, continues to be the bulk energy provider in India. It makes up 205,312 MW or 89 per cent of the thermal power capacity. Coal-based power is one of the most resource-intensive and polluting industries.

This was done under the Environment Protection Act, 1986. All TPPs were required to comply with the revised standards within a period of two years — by December 2017.

“The industry has been giving excuses and the deadline has been pushed to 2022. CSE analysis reveals that even this deadline will not be met by 65 per cent of the installed capacity. It is however to be noted that 35 per cent of the capacity is still striving to meet the norms,” the report says.

It goes onto list a number of plants that are complying with the norms to contain pollution due to particulate matter, nitrous oxide and sulphur dioxides.

The report urges that the state pollution control board give a certificate to such plants to certify they are complying with the December 2015 environmental norms.

First-run power stations should also be ranked and power procured from them on priority after must-run plants. 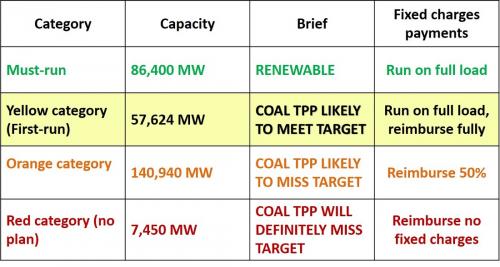