UP, Maharashtra have most critically polluted industrial regions: CSE

Air-quality levels continue to worsen in several industrial regions of UP, Maharashtra, Gujarat and Rajasthan despite pollution abatement plans in place for critically polluted areas

Air pollution due to industrial clusters has increased in UP, Maharashtra, Gujarat and Rajasthan since 2009. Photo: Kanti Kumar/CSE

Uttar Pradesh and Maharashtra had the greatest number of ‘critically polluted’ industrial regions in India, according to a recent analysis by Delhi-based thinktank, Centre for Science and Environment (CSE).

They found out that as many as 13 industrial areas in UP, seven in Maharashtra, eight in Gujarat and five in Rajasthan were still critically / severely polluted with respect to the 2009 air quality levels in these regions.

Mathura, Bulandshahr, Ferozabad, Moradabad in Uttar Pradesh; Chandrapur and Tarapur in Maharashtra; Vadodara and Ankleshwar in Gujarat; Jodhpur and Bhiwadi in Rajasthan were found to be the top critically polluted regions with a high CEPI air score.

The CEPI scores in the following clusters clearly portray the concerning levels of air quality in these industrial regions:

A CEPI air score of 60 and above denotes an industrial area to be ‘critically polluted’ and a score between 50-60 classifies it to be ‘severely polluted’.

Top regions with worsening air quality: A comparison of 2009 and 2018 CEPI air score

CSE also compared the latest 2018 assessment scores for air with the 2009 scores. We found out that from the 2009 levels, air quality had worsened in several industrial clusters.

The majority of these industrial regions belong to Uttar Pradesh. A drastic increase in CEPI air scores was observed in Mathura, Bulandshahr, Moradabad and Ferozabad in Uttar Pradesh, Najafgarh drain basin in Delhi comprising of Anand-Parvat, Naraina, Okhla and Wazirpur areas, Vadodara in Gujarat, Jodhpur and Pali in Rajasthan and Durgapur in West Bengal. 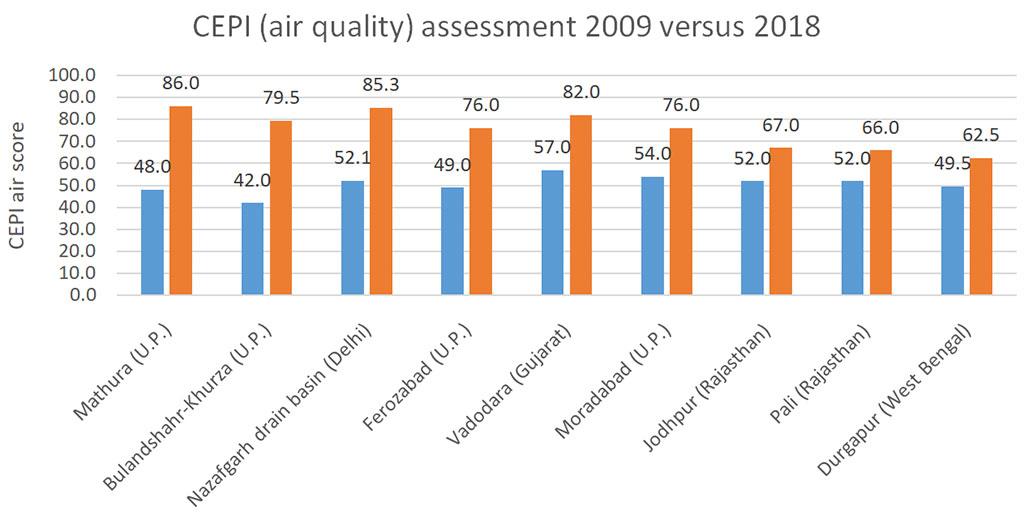 What is a CEPI index?

CEPI is a nationwide index that was developed to represent the quality of ambient air, surface water, groundwater and soil of a particular industrial region or cluster with a score.

The overall CEPI score was calculated based on the individual score assessment for air pollution, surface water pollution, groundwater and soil pollution in the identified cluster.

A CEPI air score of 60 and above denotes an industrial area to be ‘critically polluted’ and a score between 50-60 classifies it to be ‘severely polluted’ with respect to air quality.

CEPI assessment was first carried out by CPCB in 2009-10 and has been done periodically since then in 2011, 2013 and 2018. The aim of CEPI assessment was to identify, declare and prioritize critically polluted and severely polluted regions in order to formulate comprehensive remedial action plans for pollution abatement in identified regions.

Periodic CEPI assessment reflects the current environmental quality of the region and also serves as a yardstick to assess the implementation of action plans.