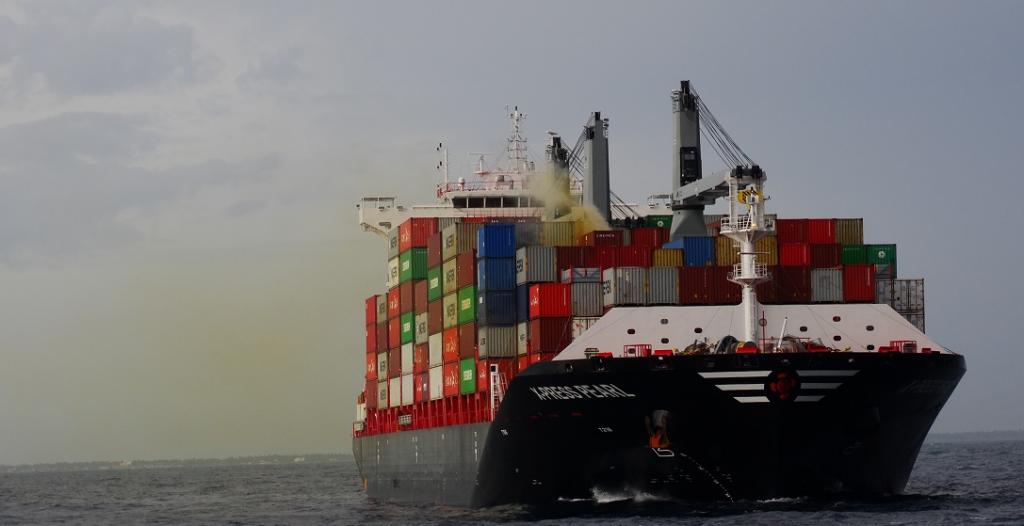 Nitric acid fumes on board the X-Press Pearl on May 20, 2021, which ignited the blaze on board. Photo: Isuruhetti via WIkimedia

A fire that broke out on Singapore’s X-Press Pearl container ship due to leaking nitric acid on May 21, 2021, now threatens to bleach coral reefs near Sri Lanka’s capital Colombo and kill marine life.

The fire lasted for about 13 days. Though it has been controlled now, the threat of a possible oil spill is still looming. Sri Lankan authorities have denied any reports of an oil spill but aerial views of the area show a green layer surrounding the ship.

The ship was slowly sinking about 10 nautical miles away from Colombo harbour as of June 5. “The ship’s aft portion remains on the seabed at a depth of about 21 metres and the forward section continues to settle down slowly,” X-Press Feeders, the owner of the ship, said.

The ship was carrying 1,486 containers including 25 tonnes of nitric acid, an estimated 78 tonnes of plastic pellets and other hazardous cosmetic material.

An estimated three billion tiny pellets have spilled in the water and are clogging the beaches near Colombo harbour.

These low-density pellets float over the water and can absorb the oil and other toxins present in the water. Marine animals like sea turtles and fish, mistaking them for food, can ingest these pellets and eventually die.

These pellets absorb the toxins present in the water. Once marine animals consume them, these toxins can leach out in their bodies and travel up the food chain. These will have a long term impact on the fishing industry. People are really concerned about the impact of this pellet spill on fish and other marine animals.

Fishing activity in an 80-kilometre-long stretch has been banned, fearing contamination due to toxins and floating pellets in water.

The decision to suspend fishing will put more pressure on the coastal community. Already, the fishing industry was facing issues due to restrictions under the novel coronavirus disease lockdown, Gunawardana further said.

Barrier-type reefs are found in Colombo and the Negombo region. Most reefs near the shore are affected by human activities, including destructive fishing and coral mining.

The vessel was also carrying 297 tonnes of heavy fuel oil and 51 tonnes of marine fuel oil. Some of it has already been consumed in the blaze. But Sri Lankan authorities are worried about the fuel that has remained.

An oil spill would be detrimental for the coral reefs found near the Colombo-Negombo coastline. The spilling of oil would damage and bleach the coral reefs by cutting off light and oxygen. It can also make the regulation of temperature difficult, leading to the death of aquatic life.

To save the coral reefs, the salvagers tried to pull the ship towards the deep water but were unsuccessful.

The ship has already hit the bottom of the ocean, causing further damage to the reefs in the region. The pellet spill has already done a lot of damage to the marine life near the Colombo coast. This damage could be exacerbated by the impending oil spill.