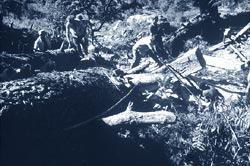 trees are news in Himachal Pradesh (hp). While 200 people hauled the state government to court demanding a fair price for trees grown on their land, hp chief minister (cm) P K Dhumal sought compensation from the Union government for a 'complete ban' on felling .

Farmers from six districts of hp petitioned the hp High Court (hc), challenging the hp Forest Produce Regulations Rules Act, 1982. The act makes it mandatory for locals to sell trees from private lands to the hp State Forest Corporation (see box: Price-fixing). The petitioners alleged that the state was exploiting the act by procuring trees on private lands at throwaway prices and selling at higher rates. "We get far less than the actual sale price," says Jai Singh, a petitioner and resident of Barseni village in Kullu district. Tree owners want prices fixed by the forest department to be quashed. They have also sought payment at prevailing rates.

On December 9, the hc set a January 31, 2003, deadline for the state to decide on the price. Sources aver the state government is likely to comply. But forest officials didn't want to comment on the pretext that the issue was sub-judice.

The 1982 act requires the state government to fix the price of trees from time to time on the recommendation of an advisory committee. The committee comprises members of agricultural associations, the forest department and the hp Forest Corporation. At present, there is one panel each for the state's 40 forest divisions. Each committee has five members and is headed by the divisional forest officer. "The role of the committee (if it meets) is purely advisory," reveals a forest official. "It's a toothless tiger. The price is supposed to be 'mutually agreed' upon between the state government representative and private tree owners under section six of the act," he adds. But, in the past 10 years, the state government has not consulted tree owners.

"The government bypasses the statute provisions. The procurement price varies according to the whims and fancies of the authorities," alleges Singh.
Meanwhile Dhumal, addressing a meeting of the National Development Council in Delhi, demanded his state be recompensed for banning commercial green felling for the past 17 years.

Dhumal said: "The standing forest wealth in hp is over Rs 1,00,000 crore and harvesting can yield approximately Rs 300 crore annually. The Union government should reimburse us for this environmental protection effort."

This is the second time in four years that Dhumal has made such a claim. In November 1998, too, the cm had made a similar demand before the 11th Finance Commission. At the meeting of the 10th five-year plan of the state, its forestry budget was raised from Rs 36,500 lakh to Rs 42,377 lakh. The cm initiated a move to lift the ban in February 2000, which drew flak from environmentalists and political parties.

Official statistics, however, reveal that there was no blanket ban on green felling until 1994. And according to a circular issued on March 11,1987, the 1983 ban was restricted to green felling. Divisional forest officers were required to seek permission of the chief conservator for felling. Green felling continued till 1990 when it was banned again. The restrictions were lifted in July 1993 but re-imposed in March 1994.