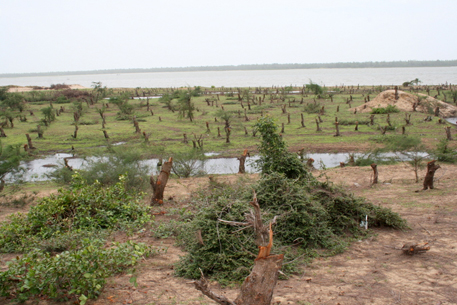 Panic gripped sea side villages of Nuagaon, Noliasahi, Polanga, Gadakujang and other villages on Friday near the Jatadhari river mouth at the proposed steel plant site of Posco in Jagatsinghpur district of Odisha as cyclonic storm Phailin approached the state.

Once the very mention of these villages conjured up images of virgin mangroves, cashew nut, betel vines, fruit bearing trees and casuarina forests. Today, those verdant visions are fading fast as the authorities have chopped thousands of trees for the construction of a steel plant of the South Korean steel company Posco. A vast expanse of stumps of trees greets the eyes now.
In the 1999 Super Cyclone, these villages were not devastated by nature’s fury as the green cover and sand dunes protected them from the surging tidal waves, whereas more than 10,000 persons perished in the nearby Kujang and Earasama blocks.

“Two years ago, the authorities denuded large tracks of green cover for which we have been spending sleepless night since past three days as the cyclone Phailin will hit our villages on Saturday”, said Mahadev Swain (62) of Noliasahi.

In 1999, nobody left this area at the time of super cyclone. But now hundreds of people living in these coastal pockets have shifted to safer places, including cyclone shelters and structures on higher lands on Friday as cyclone Phailin reached within around 400 km of Paradip coastline, said Manoranjan Jena of Noliasahi.

The authorities have already wreaked havoc by cutting down 170,000 trees and 2,500 betel vine farms spread over 2,700 acres (one acre equals 0.4 hectare) in villages Polanga, Noliasahi, Dadhibabanpada, Bhuiapala, Mathasahipada, Sidhagumphapada, Balisahi, Nuagaon, Gobindapur and other villages in the proposed steel plant site, said residents. “Trees were the natural barrier against cyclonic storms. But now our fate hangs in balance after the officials forcefully cut the green cover in our areas,” said Satrughan Samal of Polang village.

"We protested against the felling of trees .But the authorities did not heed our pleas. They used police to fell the trees. Now the violent sea will devour us. One can see how an ecological treasure house has been systematically decimated, and ruin brought on the people who depend on it for sustenance," said Bhaskar Swain, former Sarapanch of Nuagaon Gram Panchayat.

"The situation in seaside areas, once renowned for extensive forests and woodland, has now drastically changed. No one was killed in Dhinkia, Nuagaon and Gadakujang gram panchayats in the proposed steel plant site of Posco on October 29, 1999. With the disappearance of trees and sand dunes we could face the worst of a tidal surge on Saturday,” said Sishir Mohapatra, general secretary of Posco Pratirodhaka Sangram Samiti (PPSS).

People also complain of the hardships they face now. With forests disappearing fast, fuel wood and fodder is hard to come by. People have to walk about eight km to spend hours collecting wood. “It is not just the forest which is in danger but the very survival of people around the forests here is at stake. During the super cycle in 1999, casuarina and mangrove forests saved us. But now our fate hangs in balance after the authority axed thousands of trees, said Sarat Biswal of village Nuagaon.