BESIDES inducing extreme rainfall and prolonged droughts, changing climate has made traditional wisdom of farmers defunct. Earlier, they would read signs of nature— flowering time of trees to egg laying by birds—to predict weather and decide on sowing and harvesting. But with climate change, farmers find they can no longer rely on their native wisdom.

This prompted the Indian Agricultural Research Institute and India Meteorological Department (IMD) to step in. In 2007 they started Integrated Agromet Advisory. The advisories provide weather information for crop and livestock management to farmers in 127 agro climatic zones of the country and are issued twice a week.

Though the effectiveness of the programme is yet to be established, it is set to get a boost. It is to be a part of the National Initiative on Climate Resilient Agriculture launched by the Indian Council of Agricultural Research in February 2011. The initiative aims to build climate resilience in agriculture through strategic research, technological intervention and capacity building in 100 climatically vulnerable districts of India. The findings from this initiative will form a part of the National Mission on Sustainable Agriculture, under the National Action Plan on Climate Change, which will decide future adaptation strategies. Experts say that before such an expansion takes place it is necessary to ascertain how much the programme has actually benefitted the farmers.

N Chattopadhyay, deputy director general of meteorology at agromet division of IMD reveals that three million farmers in the country have been reached through the advisories. But this is only 10 per cent of the farming community in India. A 2010 National Council for Applied Economic Research report found that 95 per cent of the farmers still rely on village elders for weather forecasting. It added that only nine per cent of the farmers agreed that agromet information helped them reduce cost during stress periods.

The concept of agromet advisory has helped stressed out farmers across the world, but what ails the advisories in India is lack of infrastructure and understanding. Agriculture is dependent on local weather conditions but the information generated is at the district level. “The advisories generated are generic as currently there is only one automatic weather station in each district. In the monsoon-driven weather system of India, local agro-meteorological conditions, especially rainfall, vary within a kilometre,” points out K K Singh, head of agromet division of IMD. For better information there has to be a weather station in each mandal which comprises 20 to 30 villages, adds Sudha Rani, scientist at N G Ranga Agricultural University in Andhra Pradesh. 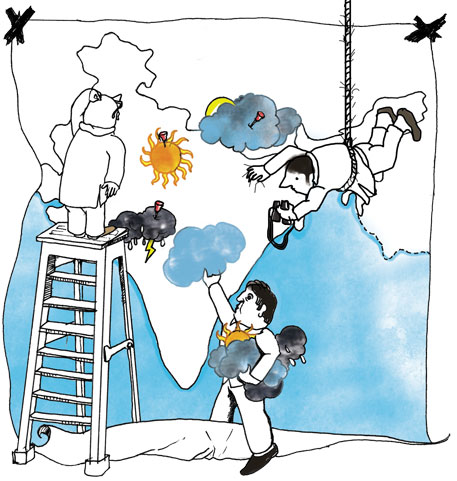 Moreover, after the information is generated at stations, it is further spread through TV, newsletters, cellphones and Internet. But information technology is at a very nascent stage in villages in most states. This results in the advisories not even reaching the villages. K Ravi, associate editor of Tolakari, a community magazine for sustainable agriculture, points out that Andhra Pradesh saw a massive drought in 2011 and farmers in Khammam and Kareemnagar districts did not receive the advisories. “Andhra Pradesh saw 1.9 million hectares of rainfed land being sown with Bt cotton, a water intensive crop. Consequently, the farmers suffered loss of Rs 3,000 crore,” he adds.

Sometimes, even the suggestions are impractical. For example, an advisory issued in August, 2011 to Khammam and Kareemnagar asked the farmers to do supplementary irrigation which is impossible given the drought conditions. “This is complete failure of the advisory system,” adds Ravi.

Singh says the concept is not bad but what is needed is to scale up the advisories by building up infrastructure. But experts say adding a human face can do wonders. There needs to be a two-way communication between the scientist and the farmer. At present, the advisory is prepared very subjectively. “First, the farmers may not get the information and even if they do, they may not have understanding to adapt to it. Instead, they prefer going to a local pesticide shop and seek help on what to do,” Ravi notes. Choosing someone from their community and making him spread the word can change things, he adds.

Government plans to upscale weather forecasting for farmers, but will it benefit them?