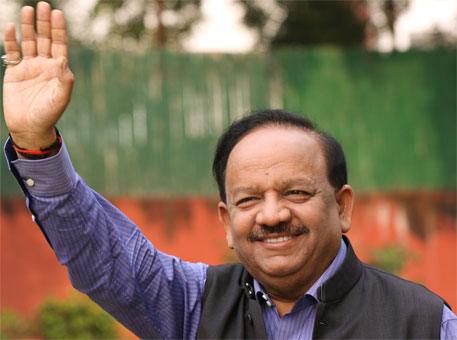 Harsh Vardhan started his new innings as the Union health minister on Tuesday with a meeting of all ministry officials. The health minister said the new government will push for increased public-private partnership (PPP) and an insurance-driven health sector.

“I am not in favour of taxpayers’ money being used to push a one-size-fits-all health policy. From this morning itself, I have started contacting public health practitioners to know their minds on what should be the road ahead,” said the minister at the meeting. Interestingly, even the previous UPA government had pushed for privatization in the sector.

The minister also said he would address the growing concern regarding diabetes, heart diseases, occupational diseases and ailments connected to sedentary lifestyles. He promised to put a check on overconsumption of fast foods through a plan that would be drawn after consulting state governments. Promoting yoga and physical exercises is also high on Vardhan’s agenda.

He said the ministry will engage with all organisations — government, non-government, private or voluntary sector — that are connected with the people. The minister said that the health sector has to learn “from the micro-health insurance instruments developed by NGOs, self-help groups and small private entities”. He also emphasised on the need to strengthen the Rashtriya Swastha Bima Yojana of the Ministry of Labour and Employment.

"Bharatiya Janata Party had mentioned about PPP in their manifestos of 2014 as well as 2009. Not using taxpayers’ money for one-size-fits-all policy would mean that the poor will receive cheap care while those who can pay will pay for the services," said Amit Sengupta, associate global co-ordinator of the Peoples Health Movement. According to him, global evidence has showed that such a system has never worked for the benefit of people. Sengupta also feared that the decision to keep the rich out of the public health system might actually further weaken the system.