Fishery experts say a global system of management is essential to prevent the extinction of the world's fish stocks, even as the number of fishing trawlers increase 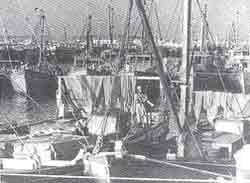 A GLOBAL system for sustainable management of the world's fish stocks, which are being rapidly depleted by heavily subsidised national fishing fleets, is essential to prevent their extinction, participants in a recent UN conference have urged.

The session in New York, a follow-up to the Earth Summit in Rio de Janeiro last year, was held in the wake of a warning by the UN Food and Agriculture Organisation (FAO) that unless measures are taken urgently to end over-fishing, most of the world's major commercial fish species, especially cod, tuna and mackerel, are in danger of "collapse", the prelude to extinction.

"Unless and until we agree to something concrete," said conference chairperson Satya Nandan of the island nation of Fiji, "the trend is clearly against the sustainability of the fish resources of the oceans. There is no unlimited freedom to fish the high seas."

Though Nandan hailed "a remarkable degree of convergence on many substantive issues", observers noted deep divisions among fishing nations on how to institute controls.

Despite general support for application of the precautionary principle, defined in the Rio declaration as not using lack of data as an excuse to avoid implementing conservation measures, European Community (EC) delegates argued this principle applied to industrial and toxic waste, which presented a clear and present danger to humans and their environment, and "was not automatically transferable into the fishery field".
But FAO statistics indicate the world's total fish catch dropped from 86 million tonnes in 1989 to 82.7 million tonnes last year and 90 per cent of the 1989 catch was taken by just six countries -- Japan, Poland, Spain, the former Soviet Union, Korea and Taiwan.

What is more worrisome to fisheries experts, however, is that the number of vessels fishing the world's seas has tripled in the last 10 years and the three million trawlers operating globally have reported till now, annual operating losses of $54 million. They say this combination is a guaranteed recipe for more intensified fishing, which will not only result in damage to ocean ecosystems, but also raise the risk of confrontation between rival fishing states.

Meanwhile, incensed Senegalese fisherfolk are reportedly lobbying the European Parliament to end an agreement that allows fishing fleets from Spain, France, Italy and Greece to fish off Senegal in return for an EC payment of $40 million over two years. Senegalese fishing union leaders, such as Aliou Sall of Credetip, say that the European fleets have exhausted their own ocean resources and will inflict similar devastation in Senegalese waters. Sall also asserted, "During 1990-91, 48 local fisherfolk were killed in incidents with European boats. There have been many collisions at night as local boats fish with no lights."