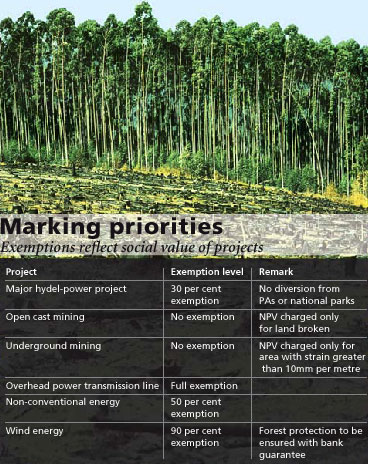 What is the value of our forests? Right now, as per the net present value (npv), a hectare (ha) of forestland costs anything between Rs 5.8 and 9.2 lakh.

The amount represents more than just timber. It is actually a one-time payment that a user has to make for diverting forestland for non-forest use. The pooled funds -- managed by a central body called the Compensatory Afforestation Management and Planning Authority (campa) -- are then used for afforestation and reforestation.

But the figure has been criticised because the country's forestland has never been evaluated vis--vis the intangible benefits of forests in various bio-geographic regions (see 'Too Cut & Dried', Down To Earth , July 31, 2005).

Keeping that in view, on September 26, 2005, the Supreme Court (sc) set up an expert committee to identify the parameters to properly evaluate forests and identify projects eligible for exemption from npv payment. The committee -- headed by Kanchan Chopra, director of the Institute of Economic Growth, Delhi -- submitted its recommendations in May.

The committee has done its job and even gone a step beyond the terms of reference laid down by the sc: it has recommended a management system for npv funds and given protected areas (pas) an inviolable status. But whether the recommendations will be accepted is yet to be seen. As of now, the report is open for public comment till July, when the apex court will take a decision on it.

The committee's primary task was to properly valuate the forests. "But a price cannot be put on the inviolable nature of pas and the bio-diversity-rich areas like sacred groves and mangroves," says Chopra. " pa s should not be diverted for any non-forestry use at any cost."

For areas other than pas, the committee has set a methodology that includes the goods and services provided by the forest eco-systems: timber, non-timber forest produce, firewood, fodder, grazing land, tourism, carbon sequestration, flood control, biodiversity and nutrient cycling, and many more.

Though it does not put a price tag on every forest patch, it takes Himachal Pradesh (hp) as an illustration and sets the minimum npv at Rs 1.57 lakh per ha for Nahan Circle (a monoculture forest) and the maximum at Rs 8.57 lakh per ha for Bilaspur Circle (a dense forest). "The maximum npv charge is actually infinite, as the pas haven't been priced," says Chopra. Charges will be site-specific, and evaluated at the forest-range level, says the report.

The committee has further suggested that the full compensation for diversion of forestland should also include the ground rent for the land -- which goes to the state coffers -- subject to a minimum of Rs 10,000 per ha.
The committee took six months and sat through 113 presentations from prospective forestland users -- mostly hydroelectric power companies -- to prepare the report. It suggests a 30 per cent npv exemption for major hydroelectric projects, which occupy vast stretches of forestland and are currently taking care of the biggest chunk of payments to campaAccording to Chopra, "Projects with more than 50 per cent of additional capital cost burden should be given some consideration and so the exemption for hydroelectric projects." Besides, the committee has identified seven principles, under which it has given complete exemption to some public works, welfare projects and tribal rehabilitation projects. It has also acknowledged traditional practices like jhum cultivation as an agro-forestry activity and recommended it for exemption.

The committee has, however, expressed concern that no campa collections were distributed between January 2001 and April 2004, even though 573,164 ha of forestland were diverted for non-forestry use. It suggests a three-tier system of central, state and local bodies to ensure proper distribution of funds. "In no case should the compensation collected under npv be treated either as part of the consolidated fund of the Union or the relevant state," says the report.