Dirty needles not responsible for Africa's AIDS crisis: WHO 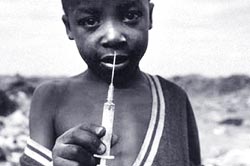 the World Health Organization (who) is toeing the Bush administration's line, proves a recent research of the premier health institute. As per the study, infectious syringes account for only 2.5 per cent of the hiv infections in Africa and unsafe sex practices are mainly responsible for the continent's aids crisis. This conclusion is bound to create furore, with most experts advocating that 20-40 per cent of the infections are passed on via dirty injections. The varied difference in opinion is a cause for concern as policymakers use the 'estimates of experts' to allocate funds for different preventive measures. At present, maximum funds in Africa are being channelled for disseminating information about the adverse outcomes of unprotected sex.

The who study, published in The Lancet (Vol 363, No 9407, February 7, 2004), is based on a number of observations -- in sub-Saharan Africa unsafe intra-muscular injections (reused needles) are not as frequent as assumed by most experts. Furthermore, needles and syringes are uncommonly contaminated by blood after use, as the common practice of washing and heating of reused needles and syringes destroys hiv.

As per David Gisselquist, an independent researcher based in the us, who has played down the risk of contaminated needles by making statements based on unscientific annotations.