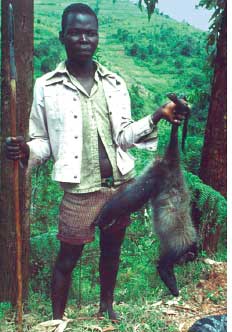 Against habitat loss, hunting and trade

primates, mankind's closest relatives in the animal kingdom, are on the road to extinction because of habitat destruction followed by hunting for food and wildlife trade. Of the 634 primate species studied by the World Conservation Union (iucn), almost half of them are facing the threat of extinction. In Asia, more than 70 per cent of primates are classified on the iucn Red List as vulnerable, endangered or critically endangered.

"Tropical forest destruction has always been the main cause (of primate decline), but now it appears that hunting is just as serious a threat in some areas, even where the habitat is intact," says Russell A Mittermeier, chairman of iucn Species Survival Commission's Primate Specialist Group.

Tropical countries across three continents have the highest number of primates under threat. In both Vietnam and Cambodia, 90 per cent of primate species are considered at risk of extinction. Populations of gibbons, leaf monkeys, langurs and other species have dwindled due to rampant habitat loss exacerbated by hunting for food and to supply the wildlife trade in traditional Chinese medicine and pets. In Africa, 11 of the 13 kinds of red colobus monkeys assessed were listed as critically endangered or endangered. Of these, two may already be extinct.

But new species are also being discovered. Since 2000, 53 primate species, previously unknown, have been found, of which 40 were from the island country of Madagascar. The primate review is part of a larger comprehensive state of mammal review being prepared by iucn and will be released in October 2008.