Laboratory tests nail the Plantation Corporation of Kerala. The state government sets up an inquiry committee 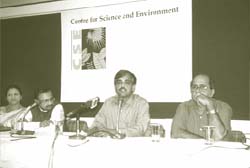 In the face of mounting pressure from the media and civil society, the Kerala government has appointed an expert committee to investigate the unusual diseases in Padre, a village in Kasaragod district, Kerala. The village has a number of people suffering from diseases of the central nervous system, which, believe the residents, are due to spraying of the insecticide endosulfan by the Plantation Corporation of Kerala. The committee, headed by environmentalist A Achuthan, will submit its report within three months.

The Centre for Science and Environment has already conducted laboratory tests of the samples collected from the village. The findings were released at a public meeting in New Delhi on February 21 and the report handed over to Mohana Kumar Y S, a doctor and a resident of the village. The tests, conducted by Padma S Vankar, head of ecological and analytical testing at Indian Institute of Technology, Kanpur, have confirmed the presence of endosulfan in every sample (see 'Children of endosulfan', Down To Earth , Vol 9, No 19, February 28).

All fingers point to the Plantation Corporation of Kerala, which undertakes the ariel spraying of the pesticide on its cashew plantations thrice a year. Anil Agarwal, chairperson of CSE, said that the government's toxic model of economic growth is coming at a high environmental and human cost. "This instance is a pointer to the fact that there could be many more villagers in India that face similar problems. The problem is that we simply do not know about them," said Srikrishna "Shree" Padre, a farmer and journalist from the village. Kumar said that he tried to get a scientific study of the problem, but no institution came to his rescue. Sunita Narain, director, CSE, said that the purpose of the laboratory will be to provide scientific information to communities fighting against environmental pollution.