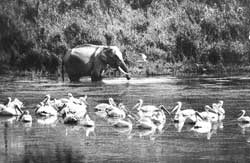 there is no money to conduct an elephant census in Meghalaya. Faced with frequent human-pachyderm conflicts, the state forest department had planned an elephant census last month as part of its elephant conservation programme. However, the project has failed to take off due to paucity of finance.

Several conservation schemes are awaiting funds sanction from the state government. According to the status paper on the census project, the rise in human-pachyderm conflict is mainly attributed to the practice of Jhum cultivation, which destroys animal habitat, forcing them to invade crop fields.

The report states that most cases of depredation occurred between June and December, which coincides with ripening of paddy and availability of cotton flower buds.

Till 2001, 22 villagers were killed and 17 injured in elephant attacks. However, only 28 per cent of the villagers wanted these animals to be completely wiped out. It also brought to the fore the fact that about six per cent of jumbo deaths were due to poaching in the area.

Conservationists strongly believe that elephant movement corridors can go a long way in saving the elephants.