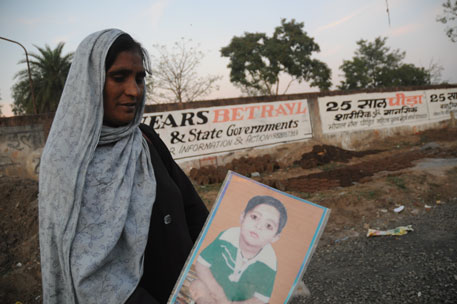 Almost three decades after the Bhopal gas leak killed a few thousand people overnight, the struggle continues for its survivors. A number of issues concerning the survivors of the disaster, termed the biggest industrial accident in history, seemed close to resolution this year, but none were resolved. Provision of potable drinking water, removal and disposal of the toxic waste from the Union Carbide factory and even a strict apex court ruling requiring the government to provide full healthcare facilities to the survivors were all just promises made in government offices and court rooms.

The survivor organisations have organised numerous protests and wrote letters requesting the India government to withdraw from the Olympics sponsored by Dow Chemical. In Bhopal and Delhi, hundreds of protesters have been asking the prime minister of India to explain why their plight has not improved in the past 28 years.

For officials, Bhopal has become an “emotive issue” and thus resolutions planned and proposed always failed to take off. Though there is a Bhopal Gas Tragedy Relief and Rehabilitation department, most of the decisions require to be approved and executed by the Central government. The main concerns following the December 1984 disaster have been: groundwater and soil contamination, poor health facilities, incorrect count of those affected by the gas leak, disposal of the toxic waste at the Union Carbide factory site, making Dow criminally liable for the gas leak and subsequent events and lack of government involvement in the continuing litigation in the United States of America.

One positive development in 2012 was the official acknowledgement of groundwater contamination around the Union Carbide factory. Despite studies by reliable organisations and laboratories, the Government of India and the Madhya Pradesh government have denied groundwater contamination in and around the Union Carbide factory (also see 'The chemistry of living death'  and 'The poison piles up') .

Despite the apex court coming down heavily on the government and other agencies involved in providing relief to Bhopal gas leak victims, the government has failed to take any action. In August, the Supreme court, while disposing of a public interest petition ordered better health facilities for Bhopal gas victims, directed that standard treatment protocols be implemented and noted that public studies on the disaster-affected people need to be carried out.

The toxic waste lying at the factory premises is another major point of contention. It is to be disposed of by the Central Pollution Control Board and at the beginning of 2012, a German Company, GIZ, was called in to dispose of the waste. After a long debate between Indian authorities and the German agency, the proposal to incinerate the waste in Germany fell through  (also see 'Bhopal to Germany'). Vinod Babu, head of the hazardous waste division of the Central Pollution Control Board says: “We are working on the best solution possible to ensure proper disposal of the waste and that is why it is taking time.” He explains that the waste, disputed water contamination and other pollution caused 28 years ago has become an “emotional concern”. “We are required to keep many non-technical concerns in mind while dealing with any issue related to Bhopal gas leak and thus it takes longer than it would otherwise.”

It has been reported that the waste may now be disposed of in the sea since the site at Pithampur in Madhya pradesh—the Centre is routing for it--is controversial. A senior official with the Union ministry for chemicals and petrochemicals, on condition of anonymity, says: “For 30 years, we have been trying to get rid of the waste but every time it seems like we might succeed, some activists protest for one or the other technical reasons we are unable to dispose it of.”

There seems to be no end to the delay. In October, the Madhya Pradesh High Court lifted the seven-year old stay on summoning Dow Chemical—the parent company of Union Carbide. Whether the show-cause notice is ever given to Dow and whether the company actually appears in court remains to be seen. Meawnhile, the numerous cases continue to drag (see Bhopal gas leak: curative petition downplays number of deaths; SC refuses to restore stiffer charges for Bhopal disaster accused  and Union Carbide refuses more compensation to Bhopal gas leak victims).

There has been an attempt to rework the corporate liability and bring the chemical giant Dow Chemical to book. The company has consistently denied any responsibility for the 1984 disaster. But legal experts and activists say the company is hiding behind a corporate veil and is accountable  (also see 'The Bhopal legacy: reworking corporate liability').

The delays and postponements have been innumerable for the survivours and victims of the 28 year old disaster. Rashida Bi of Bhopal Gas Peedit Mahila Stationery Karmchari Sangh says, “I want to hope things will get better and we will not be living in the shadow of 1984 but every time some improvement is seen in the horizon, we are scared it will not come through.” Echoing her sentiments, Nawab Khan of Bhopal Gas Peedit Mahila Purush Sangharsh Morcha says, “The government and courts just talk. On ground, nothing ever gets done. With this kind of treatment it is very difficult to remain hopeful that things will improve at some point.”

In an attempt to bring the big corporate giant to book, activists have even filed a case in the US. But the case was dismissed for the third time in a decade by a district court earlier this year. The activists appealed against this dismissal in late November.

Along with the protests and ongoing court cases to mark 28 years of the gas leak, the Bhopal survivors organisations circulated a charter of demands, titled Corporations and Governments in USA and India must ensure justice and a life of dignity for the Bhopal survivors and their children well before the fourth decade begins (see 'Charter of demands'). It says the 25,000 people are dead and numbers are still mounting and 150,000 are battling chronic illnesses.