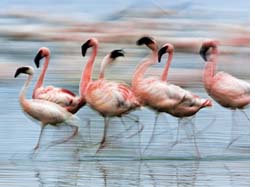 Tata Chemicals is getting considerable stick from conservation groups and environmentalists in Africa over its plan to set up a soda ash facility jointly with the Tanzanian government. It is being feared that the venture, for which a memorandum of understanding has been signed, may drive the world's rarest bird--the lesser flamingo (Phoenicopterus minor)--to extinction.

The plant, proposed to be set up on the shores of Lake Natron in northern Tanzania at its border with Kenya, will mine soda from the lake to prepare soda ash (sodium carbonate). Conservationists say the process will disturb the lake's chemical composition and affect the 'sensitive' ecosystem that has been protected as a Ramsar site since 2001.

But the Tanzanian government seems to have made up its mind to go ahead with the project.On August 1, the country's National Development Corporation declared the project safe and said it "will not have adverse [any] impact on the lake and its environs". Experts say the government aims to draw 40 per cent of its national gdp from industries by 2020. It is thus giving rapid clearance to industries, often compromising on environmental front.

The move is likely to cause a rift between the country and its eastern African neighbours, as the lake and its surrounding rangelands are critical for conserving the region's biodiversity. Kenya is stoutly resisting the project saying that Tanzania prevented it from building a dam on the river Ewaso Nyiro, the main freshwater source for the salty lake, in 1990. Tanzania had raised concerns about the dam's impact on the lake's ecosystem.

Uganda and Ethiopia also oppose the move, arguing that the project has the potential of destroying the flamingo tourism industry in the entire region. It will also affect the region's indigenous Maasai community--semi-nomadic people who freely travel over the Kenyan-Tanzanian border in search of pastures for their livestock.
The project, estimated to cost us $450 million, will set up a soda ash extraction and processing plant. It plans to mine soda from Lake Natron and produce about 500,000 tonnes of soda ash annually. The joint venture also envisages setting up a coal-fired power station and a township for 1,200 employees.

A newly formed company, the Lake Natron Resources Ltd--jointly owned by Tata Chemicals and the Tanzania government's National Development Corporation--is carrying out the project. Company sources say the facility will have a smaller environmental impact, since extracting natural soda has a smaller carbon footprint compared to making synthetic soda ash.
Environmentalists see economic reasons behind this shift from synthetic soda ash production to natural soda extraction, which is cheaper. But this economy comes at a price.

The soda ash making process involves pumping brine from the lake to a plant and then returning the depleted water to the lake. This could upset the lake's chemical composition. The lake, spread over 85,000 hectares on the floor of the Rift valley, also has a shallow basin with no direct outlet; this means it can easily suffer accumulation of contaminants. All these will drive lesser flamingos to extinction. "Even minute changes in the habitat could disrupt breeding by lesser flamingos who are 'extremely' sensitive to disturbances," says Ken Mwathe, head of ecology with the African Conservation Centre, an ngo in Nairobi. The Royal Society for the Protection of Birds, Africa, is also critical. 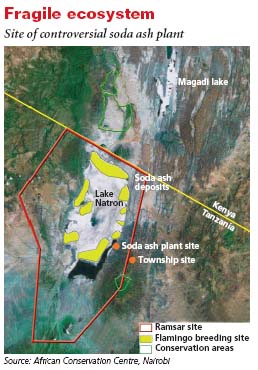 "The possibility of flamingos continuing to breed near the lake, post the setting up of the plant, is near to zero," it says.

Another contentious issue concerns the heavy use of water in the plant, which proposes to pump about 530 cubic metres of brine out of the lake every hour. The lake has already gone shallow; it is now less than three metres deep. The project has its social upshots as well. Water is a critical resource for the local Maasai community whose lifestyle centres on their livestock, which constitute their primary source of food. Environmentalists say the area is very dry with only a few sources of freshwater. In 15 hours, the plant will consume enough water to meet the needs of about 40,000 heads of livestock. Conservationists also expect an influx of people once construction starts, creating more pressure on natural resources.

The extinction of lesser flamingos will also deal a serious blow to the region's tourism industry, which is the backbone of east Africa's economy.


According to the terms of the agreement, the plant will be operational by 2010. The soda ash facility will also generate ancillary units producing commodities such as glass, soap and detergent. This will create more air and water pollution. "Such a large-scale project is not appropriate for a fragile ecosystem like Lake Natron's and those of the surrounding area. Its impact on biodiversity, community livelihoods, natural resources and tourism in the eastern African region will be adverse, long term, irreversible and not subject to any form of mitigation," says Mwathe.


Faced with criticism, the Tatas released a draft report on the environmental and social impact assessment (esia) on July 12 at a workshop in the country's capital city, Dar-es-Salaam. Tanzanian branch of the Norwegian consulting firm, Norconsult, carried out the assessment on behalf of the Tatas. "...the consultation process followed was not democratic," notes a media statement released by the Lake Natron Consultative Group--a group of environmental ngos. "While the company has released only an executive summary of the esia during the workshop, not all information related to the study was revealed."

"The [firm that conducted the] study did not consult countries like Kenya, Uganda and Ethiopia that depend on lesser flamingos for tourism, and left out many other stakeholders," says Mwathe.

Tata sources deny allegations "The workshop was a part of consultation process under esia study... no organisation or environmentalist was barred."

Conservationists also say the esia process completely ignored existing international agreements such as the Ramsar Convention, Convention on Biological Diversity, and Convention on the Migratory Species of Wild Animals, which govern the management of shared ecosystems. However, when contacted, Tata Chemicals refused to respond on whether the concerns raised by conservationists were valid.

The esia report has not yet been tabled before the Tanzanian government. Conservationists in Africa and elsewhere are determined to influence it before it goes to the government.