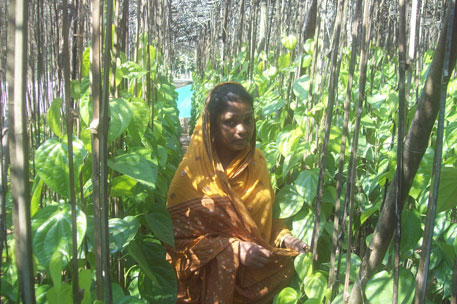 Sabita was only 25 and mother of three when pro-industry people hurled bombs at anti-POSCO protesters, killing her 33-year-old husband Tapan Mandal, in Odisha in 2008. Mandal was the anti-land acquisition movement’s first casualty in village Patana of the Dhinkia gram panchayatin Jagatsinghpur district.

Shattered by the loss at first, Sabita slowly found the strength to rebuild her life. She developed the damaged betel vineyards of her husband with help from fellow village residents and civil society organisations.

“My world changed dramatically after the murder of my husband. I can never forgive those who made me a widow, but time is the best healer. Now I am happy as I am eking out a living with paan cultivation. I earn around Rs5,000 each month. Other betel vine farmers help me in my work,”she says.

Sabita is worried about the future of her son and two daughters. But she is determined to fight for her family's survival. "I will not allow the authorities to acquire my paan farms and handover the land to POSCO to build a steel plant," she says.

Like Sabita, many persons managed to rebuild their betel farms even after the district administration flattened them two years ago.

“Police has already filed cases against around 30 persons who illegally rebuilt the betel vines after getting proper compensation. The MoU between POSCO and the state government was signed on June 22, 2005 to build a steel plant at the cost of Rs 52,000 crore. The proposed steel plant project got a fillip on June 4, 2013 when the district administration completed the land acquisition work by acquiring 2,700 acres in three gram panchayats of Dhinkia, Nuagaon and Gadakujan. The environment and forests ministry has also re-validated the environment clearance to the steel plant project,” says S K Mallick, collector of Jagatsinghpur.