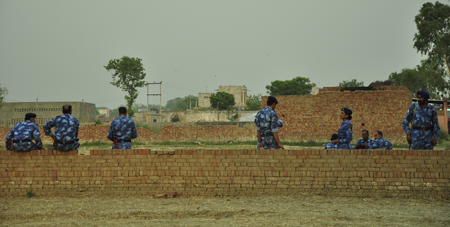 Three days after violent clashes broke out between police personnel and farmers in Bhatta and Parsol villages in Greater Noida near Delhi, the residents of the villages were under virtual house arrest. The two adjoining villages in Gautam Budh Nagar district of Uttar Pradesh was cordoned off by police personnel of the Provincial Armed Constabulary (PAC) and the Rapid Action Force (RAF); media-persons were not allowed to enter the villages. Three fire-tenders lined the entrance of the villages. One tender was being used to douse flames in a charred building.

Ram Lal Nath (name changed), a priest and an eyewitness to the clashes says a lot of blood was shed in the past two days also. The clashes and exchange of gunfire began when the police went to rescue three Uttar Pradesh Roadways employees on May 7. The Roadways employees were being held hostage by farmers of these villages who have been protesting against land acquisition for the Yamuna Expressway project, which will connect Noida with Agra. The clashes on May 7 led to houses, vehicles and fields being set on fire. Two policemen and a farmer were killed that day and around 15 persons, including Deepak Aggarwal, the district magistrate of Gautam Budh Nagar, were injured. Aggarwal sustained a bullet wound on his leg.

“There was exchange of fire in the past two days and must have cost lives, but no one has a count as people are not being allowed to enter the village,” says Nath. He has been living in the village for the past 11 years. He says has never seen such a situation where the villagers are not even allowed to step out of their houses.

Inderjit Kumar, a farmer from a nearby village says, the situation is tense in four villages—Bhatta, Parsol, Ashipur and Muttana. “We are keeping in touch with our fellow farmers in these villages through mobile phones and many of them are injured and hiding in their houses fearing for their lives,” he says. He alleged that the police was very brutal and beat men and women mercilessly on May 7 and 8 when there were clashes. There must be around 5,000 police personnel deployed around these villages, he adds.

Nath says scores of residents are missing and no-one has a clue to their whereabouts. “In the past two days, I have heard cries, slogan shouting and exchange of abuses between farmers and police personnel. There are only children and women, men of villages are either absconding, missing or have been arrested by the police,” says Nath while hurrying away at the sight of approaching policemen.

Ascertaining the casualty at this point of time is difficult. “Nobody is allowed to enter the village and the official figures cannot be believed,” says Mahendar Singh Charoli of Charoli village nearby. The build up to the clashes began in January this year when Manveer Singh Tevatia, a resident, decided to lead the farmers of Bhatta and Parsol villages. He told the farmers that Uttar Pradesh government had paid them peanuts—Rs 800 per metre—for their fertile land under the land acquisition policy whereas the market price of their land is around Rs 16,000 per metre. This agitated farmers and they decided to protest. On January 17, a dharna was held by the farmers of these villages. The protests continued over the subsequent weeks.

The dissatisfaction over compensation is increasing by the day and all the villages have decided to unite on the matter. Mahendar Singh, who is also vice-president of Bhartiya Kisan Union (BKU) of Uttar Pradesh-wing, announced a Mahaypanchayat would be held on May 12 to decide what course of action should be adopted by farmers of the Gautam Budh district. “Let all the panchayats come together and decide what should be our demands,” he says.

Police officials say more than 30 people have been arrested from the villages; residents allege more than 150 people from the four villages are missing. A body was reportedly recovered from a pool near Bhatta and Parsol but there was no official confirmation about it.

BKU national spokesperson Rakesh Tikait, son of farmer leader Mahendar Singh Tikait, says the time has come for the government to decide a policy on land acquisition in order to avoid such incidents in future. “In case this is not resolved soon, it can worsen the situation as farmers are already reeling under insecurity.” The farmer leader was arrested by police on May 8 when he tried to meet farmers of the affected villages.