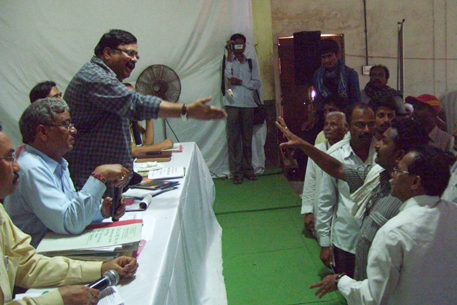 Despite a boycott staged by 17 villages affected by a proposed iron mine project, a public hearing for it was held at Alapalli in Maharashtra’s Gadchiroli district on May 8.

Additional collector Sanjay Dhivre, who chaired the hearing, and Maharashtra Pollution Control Board (MPCB) regional officer Nilkanth Nigul, who was part of the panel, ignored repeated pleas of activists and public to cancel the proceedings in view of the absence of the affected people and various illegalities committed by the Jindal group company and the administration in holding the hearing. They also pointed out that the panel of the public hearing was incomplete as per regulations since the sarpanch and gram sevaks of the two affected gram panchayats (Gardewada and Gatta) were not included on the panel.

Activist Harshali Poddar brought to the panel’s attention a gram sabha resolution drawn up by the residents of village Damkondwahi in the Gatta gram panchayat where the project by JSW Ispat Steel Limited has been proposed. The resolution, drawn on May 1, this year stated clearly the residents were against the project and directed the administration not to grant permission to the project. The resolution was submitted to the Etapalli tehsildar on the same day for appropriate action, but no cognisance was taken, she pointed out.

Activists and residents of Dhanora and Sironcha tehsils in the district who were attending the hearing in solidarity with the project-affected people raised slogans demanding the cancellation of the hearing. However, instead of taking cognizance of the grievances, Dhivre called the police to force the activists into silence. 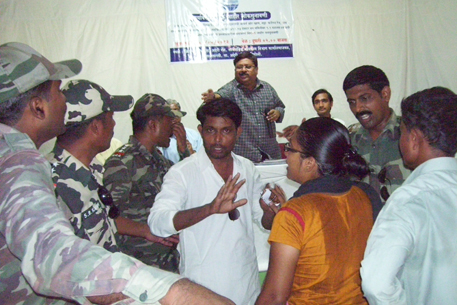 During the rest of the hearing, which lasted about three hours, repeated arguments broke out between Dhivre and the activists, resulting in several rounds of police intervention, and the speakers were forced to speak while being surrounded by police personnel.

During the hearing, Poddar and Anand from the Bharat Jan Andolan pointed out that MPCB had not displayed the notice of the public hearing at the Gadrewada and Gatta panchayat offices, and that only a single copy of the executive summary of the environment impact assessment (EIA) had been made available. What is more, JSW steel had not even submitted a Marathi EIA, as required by regulations. They also trashed the claims of MPCB of having issued public notices in a local English and Marathi newspaper, saying the affected people were highly vulnerable Madia tribals whose literacy rate was extremely low and no newspaper was available in the project area.

Poddar pointed out that the EIA itself contained many lacunae. For instance, while the June 26, 2009 notification of the Ministry of Environment and Forests mentioned allotting 995 hectares (ha) to the project, the EIA mentioned an additional 213 ha of which no account was given.

The EIA also did not provide the mandatory methodology and study details used to arrive at conclusions regarding various environmental aspects like flora and fauna, drainage patterns and so on. Several groups objected to the hearing being held at Allapalli, 80 km away from the project area, and demanded it be cancelled and rescheduled to be held where the affected people could attend. Others raised objections regarding the fact that the mine was not accompanied by industry which could generate local employment. 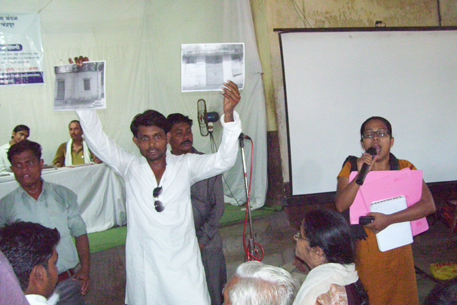 Irfan Khan, a resident of Etapalli tehsil where the project area is located, said the project should not be justified on grounds of corporate responsibility promises made by the Jindal group, “Government should organise for education and welfare on its own, not depend on corporate,” he said.

Some 100 bogus speakers recruited by the company, comprising rural women from Gadchiroli who were not sure why they had been brought there, and company employees were not allowed to speak at the hearing by the activists.

Talking to Down To Earth after the hearing, additional collector Dhivre made a surprising statement. Whether the hearing was legal or not was none of his business, he said. “I had been asked to chair the proceedings, and I have done that,” he said.

MPCB regional officer Nigul said he had received no objections regarding procedural violations since the public hearing notice was put up. “We cannot entertain objections at the last moment,” he said. He also denied knowledge of the gram sabha resolution opposing the project.

The brazen manner in which the hearing was conducted has led to widespread public discontent in the area. MLA Namdeo Usendi of Gadchiroli has issued an objection letter to the administration regarding the issue. Local MLA Deepak Atram, who had demanded that the protest be held at Etapalli, and held a protest during the hearing itself, has also extended support to the protest against the hearing. Vidarbha Environment Action Group, which was instrumental in forcing Wardha district administration to organise a repeat public hearing for Lanco Infratech’s coal fired power plant, is preparing to challenge the hearing in court, informed Sudhir Paliwal of the group.