People’s organisations say officials did not follow the correct procedure of informing village residents about the project. The environment impact assessment is also ridden with shortcomings 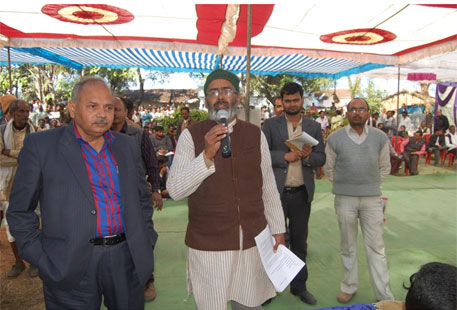 “We do not know what this project is about,” says Kamlesh Prasad Yadav, resident of Palkohan village in Chhatarpur district of Madhya Pradesh. “We came only because a jeep came to our village, saying we were going to be displaced and that we should come to the public hearing. We have come to demand a fair compensation for displacement, because we know we can’t stop the government from throwing us out.”

Both hearings were confined to pleas for fair compensation, with barely any reference to the environmental impact of the ambitious Rs 9,393 crore-project (See box: Project basics). The few attempts made to address environmental issues were not paid heed to, leading activists to call the hearings a sham.

According to a notification issued by Ministry of Environment and Forests in September 2006, the Environment Impact Assessment (EIA) of any development project has to be put up on the website of the pollution control board of the concerned state at least a month in advance of the public hearing.

In case of the Ken-Betwa river link project, however, the EIA was not uploaded until December 27, day of the second hearing. Even the executive summary was displayed less than 15 days in advance. Environment activists complain that the summary was not easily accessible on the website, making it difficult for those affected to be informed about the potential impact of the project.

“Everyone found out about the hearing too late,” says Joanna Van Gruisen, an Indian citizen and wildlife filmmaker who lives in Toria village on the bank of the Ken river in Chhatarpur. “Officials insisted the EIA was available on the National Water Development Authority (NWDA) and Madhya Pradesh Pollution Control Board (MPPCB) websites, but only the summary was available. It was supposedly available in various government offices, but those who tried to obtain a copy in Panna had to really struggle. The summary was not handed over willingly but only with pull, phone calls and persistence.”

She adds that the sarpanch of village Hinouta was given a copy in English and could not be read by anyone in his village.

Villagers say they did not know of the hearings till a few days ahead of the event since the mandatory notices were not issued to the panchayats. Most villagers DTE spoke to said that they had been notified about it by the “jeep”, only telling them that their villages were going to be displaced. Even at the end of the second public hearing, a lot of people were still under the impression that the project was a dam.

Pushpendra Bhai of Bundelkhand Future Council, a people’s organisation, had demanded the cancellation of the hearings in view of the missing information and had written to the Public Hearing Panel to this effect. But he received no response.

Environment activists point out that the EIA of the project has either ignored or addressed in a flawed manner vital issues relating to water availability in the Ken basin. In a detailed letter submitted to the panel, Brij Gopal, former professor of environment sciences, writes that basic water balance studies, which are essential to establishing the viability of the project, have not been carried out in the EIA.

He also says that the assumption of “surplus” water in the basin is based on wrong calculations and ignores the frequency of drought in the Ken basin. The Terms of Reference (TOR) of the project require that prevailing norms regarding environmental flows of rivers be followed. But the EIA does not mention environmental flows.

Another issue left unaddressed by the EIA is the impact of the Daudhan dam, from where water is proposed to be diverted, on the downstream flows in the river. Even the Ken Gharial Sanctuary and Raneh falls, both in Chhatarpur district, have been ignored despite their high visibility, the letter points out.

At the December 23 hearing in Silon, Pushpendra Bhai said that the project would impact districts downstream of the Daudhan dam—parts of Panna and Chhatarpur, along with Banda, Hamirpur and Mahoba in Uttar Pradesh—and that public hearings should have been organised in these areas too.

“Water availability in these areas is solely dependent on the flow in the Ken river, and the EIA’s contention that these areas will not be impacted is ridiculous,” he says. Apart from water, the Rs 2,000 crore worth of manual sand extraction business in the downstream areas, which provides livelihoods to thousands of poor people, will come to a halt with the dam trapping at least 50 per cent of the sand flowing downstream.

Errors in the EIA

The EIA contains several careless mistakes. In listing the wildlife in the Panna Tiger Reserve, part of which will be in the submergence zone, the EIA mentions species like brow-antlered deer (an endangered species found only in Manipur), hedgehogs, slow lorries, slender lorries, barking deer and mouse deer, species which are not found anywhere in central India. On the other hand, it has left out fish species of Ken, like the mahaseer and chitala. The forests in the area are called saal forests in the EIA, whereas they are actually teak forests.

The number of families which will be impacted by the project is different in different parts of the report, ranging from a few hundred to a few thousand.

The assessment of impacts, says Brij Mohan, is highly skewed. The impact of fragmentation of habitat within the Panna National Park has been downplayed greatly. No account has been taken of 10 years of construction work and the proposed construction of a colony for 6,000 families of workers within the park.

The EIA goes on to say that submergence will be positive for the park as it will remove encroachments by some 500 families of tribals who have been living there for centuries. Forest officials say that land submergence inside the reserve has been estimated by the EIA to be at seven per cent, while it is actually likely to be to the tune of 28 to 30 per cent.

In the absence of information and even misinformation, environmental issues could hardly be taken up at the hearings. Project-affected residents, many of whom allege harassment by officials of the Panna Tiger Reserve, pleaded only for fair compensation.

“At Silon, Chhatarpur collector, Masood Akhtar, dealt firmly with the situation and silenced the goons, but at Hinouta, the additional collector, Ajay Khare, was totally ineffective in controlling the rabble-rousers,” he says.