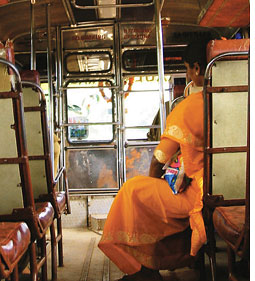 Evidence against the efficiency of private transport system is mounting. Latest is a study of the transport system in Goa that punctures the perception that private operators provide better services than public undertakings. The Gujarat-based Institute of Rural Management Anand (irma) compared the services of the state undertaking Kadamba Transport Corporation (ktc) and private bus operators in Goa and found that ktc outscored on almost every count. "Based on our findings, we challenge the view that state transport undertakings need to be privatized," says Anand Venkatesh, professor and member of the research team.

ktc had the largest fleet of 432 buses in Goa in 2004-05. This is only 10-15 per cent of the total vehicles in the state, and private operators run the rest-- 3,000-4,000 buses.According to the recently released 2005 irma study, these operators resort to unfair practices. They provide poor service to passengers in terms of staff behaviour, crowding, cleanliness and punctuality (see table High on satisfaction). But given the lack of alternatives on certain routes, passengers are compelled to travel by private buses, says the study titled 'Public or private passenger perception of bus transportation in Goa'.

The researchers observed the behaviour of passengers and bus staff and also interviewed drivers, conductors and passengers of ktc and private buses. They, however, found it difficult to obtain private operators' cooperation. Though the ktc service was found to be more satisfactory than that of private operators, the study concluded that the the corporation needed improvement. It also concluded that the government should initiate an effective regulatory mechanism for private bus operators.


The only count on which ktc lost out was financial performance, and it is getting worse every year. The corporation is running into losses. In 1999-2000, ktc incurred a loss of Rs 343.92 lakh. In 2000-2001, the loss jumped to Rs 379.19 lakh, followed by Rs 423.37 lakh the next year. In 2004-2005, the losses were as high as Rs 904.92 lakh. Transport experts, however, point out that state transport buses provide concessions to students, women, elderly people and the disabled, which are not taken into account while calculating the earnings of public-transport bodies. So a decision to privatize state undertakings should not be taken by merely looking at loss figures, they warn.

Nonetheless, the share of public-sector buses in India is shrinking. "There has been a dramatic downslide in the percentage of public-sector buses. These have come down from 45.39 per cent in 1976 to a mere 17.53 per cent in 2007. The union government is making sustained efforts to privatize all state transport undertakings," says T V Ramanayya, professor at the Indian Institute of Management, Bangalore. "During the ninth plan period, the centre issued a circular to all states stating that road transport undertakings were making losses and should be privatized. State-level funding to transport undertakings has stopped for the past five years. But such decisions have been taken without looking at the situation holistically," adds Ramanayya, who recently conducted a study in 18 districts of Karnataka and Andhra Pradesh and concluded that public operators were better than private ones.

Ramanayya claims it is possible to turn state transport undertakings into profit-making companies. This has been done in Bangalore and Chennai, and can be done in other cities as well. It is time the government shifts to the reverse gear on its privatization policy.