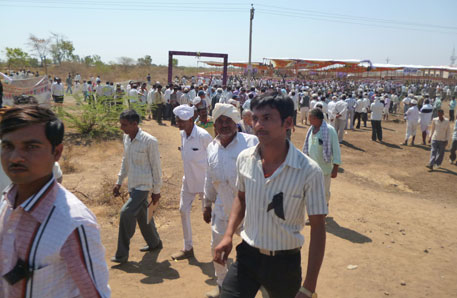 People of villages to be affected by the proposed Mithi Virdi nuclear power project in Gujarat's Bhavnagar district walked out of the public hearing organised for the project on Tuesday. About 24 villages within a 10 km radius of the project will be directly affected by the 6,000 MW capacity power plant, proposed to be built Nuclear Power Corporation of India Ltd (NPCIL). People of these villages wanted civil society members and experts to speak on their behalf at the public hearing, which the collector disallowed. Angered by the official's adamant stand, residents, numbering about 5,000, staged a walkout.

The public hearing held at Navagam village was presided over by the collector of Bhavnagar, V P Patel, and organised by the Gujarat Pollution Control Board. When the collector asked NPCIL to make a presentation on the project, the sarpanch of Jaspara village (it adjoins Mithi Virdi village), Shaktisinh Gohil, stood up and intervened. He said the village residents should be allowed to speak first because the environmental impact assessment (EIA) report for the project was invalid. He further said that since the village residents were not knowledgeable or articulate enough, experts and non-profit organisations should be allowed to speak on their behalf. But the collector insisted that people who are not affected by the project can only give their representation in writing.

The Delhi High Court order in the case of Samarth Trust and Other v Union of India & Others W.P.(C) 9317 of 2009, said: "….prima facie, that so far as a public hearing is concerned, its scope is limited and confined to those locally affected persons residing in the close proximity of the project site. However, in our opinion, the Notification does not preclude or prohibit persons not living in the close proximity of the project site from participating in the public hearing – they too are permitted to participate and express their views for or against the project."

Gohil also said that the EIA for the project is invalid as it has been prepared by a consultant (Engineers India Ltd or EIL) which is not accredited to prepare such reports for nuclear power plants.

Asked if the public hearing would be organised again in view of the public boycott, GPCB regional officer A V Shah said that board considers the consultations as concluded. He said 47 objections and representations were submitted during the scheduled time for public hearing and that these would be forwarded to the Union Ministry of Environment and Forests which mandates public hearing as a pre-condition for grant of environment clearance.

Shah said that as per the public hearing notification, the project developer (NPCIL) should speak or make a presentation first. “We went by the law. If the public had objections they could have voiced them after the presentation,” he said.

With regard to engaging EIL as consultant, P M Shah, chief engineer with NPCIL, said that the firm's application is pending with the National Accreditation Board for Education and Training (NAEBT). The board has allowed EIL to continue their work in the nuclear power sector in conjunction with Atomic Energy Regulatory Board, Bhabha Atomic Research Centre and NPCIL, he added.

The residents are opposed to giving away their land because it is very fertile. Samuben Dabhi, sarpanch of Mithi Virdi village, said that most of the farmers take three crops every year. Forty-two-year-old Ramji Bhai has 25 bighas (8.7 bighas make a hectare) of land on which he grows mango, cheeku and vegetables “I easily make Rs 7-8 lakh every year with very less input cost because of the high fertility of the land. It gives everything to me and my family to lead a happy life,” said Ramji Bhai. “Why would I give away my land when I do not need money or employment from the company?” he asked.

The sarpanch of Jaspara said residents now plan to take legal action against the authorities for conducting an illegal public hearing.