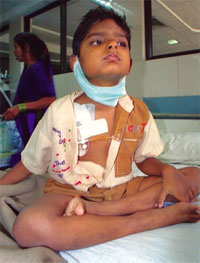 There are at least 90 cancer patients for every 100,000 population in Punjab. Cancer incidence in the state is higher than the national average of 80 per 100,000 population, reveals a survey by the Punjab government. The survey results were released on January 28.

Though several studies in the past decade had showed that Punjab has higher incidence of cancer than the rest of the country, this is for the first time the state government conducted a comprehensive door-to-door survey to quantify the problem.

The survey, which also aimed at carrying out mass awareness campaign and early detection of cancer based on warning signs and symptoms, screened about 265,000 people in the Malwa, Doaba and Majha regions. It found that about 24,000 of them were suffering from cancer. Worse, more than thrice the number—84,453—were suspected to be suffering from the deadly disease.

The study underscores that the Malwa region, already infamed as the cancer belt, has the highest number of cancer patients—107 in 100,000 population. Four districts that topped the cancer incidence list are from this region. With 136 cancer cases per 100,000 population, Muktsar district fares the worst. It is closely followed by Mansa, Bathinda and Ferozepur districts. Tarn Taran district in the Majha region has the least number of cancer patients—41 per 100,000 people. 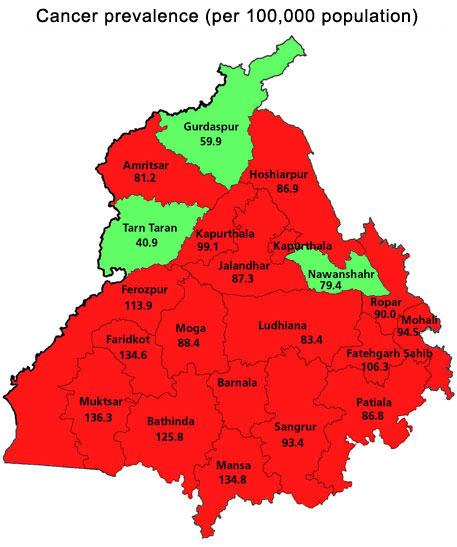 J S Thakur, additional professor with department of community medicine in the Postgraduate Institute of Medical Education and Research in Chandigarh, who has worked extensively on mapping cancer in the state, says any activity for raising awareness and early detection is a tough exercise. “However, it has to be supplemented with good service delivery system.

The major government hospitals have to be equipped enough to handle such large number of cancer patients.” Commenting on the state of affairs in the Malwa region, Thakur says multiple risk factors are at the root of the problem. “Chemical toxicity is high in this region. We have found high levels of arsenic and uranium. Pesticide use is also very high. In addition, common causes like alcohol consumption and high incidence of smoking among migrant labourers increase cancer risk in Malwa,” he adds.

A study by Delhi non-profit Centre for Science and Environment in 2004 had found high residue of pesticides in the blood of certain farmers from Bathinda and Ropar districts (see ‘Residue of a revolution’).