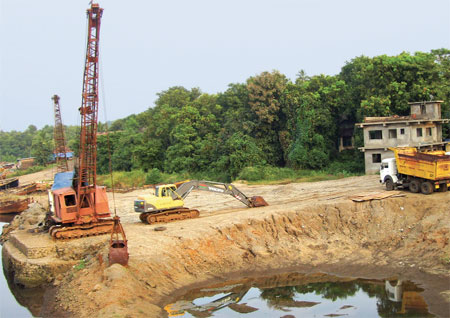 Sand dredgers will soon be back in business along the Bankot creek bordering coastal Raigad and Ratnagiri districts in Maharashtra. They had been silent for over a month after the Bombay High Court banned sand mining in the state on September 24, after people who mine sand manually filed a petition. “A month ago, it was impossible to stand near the dredging site because of the noise,” said Anis Jalal, president of Sagar Shramik Haat Pati Vaalu Utpadak Sahakari Sanstha, a union of manual excavators. A new policy of the state okays mechanical dredging.

The state government on October 20 announced its sand mining policy. Though the policy makes it mandatory for companies to take permission of gram sabhas for mining, it vests decision-making powers with the sub-divisional officer (SDO). In case of a dispute, the SDO’s decision would be final. The policy also bans use of suction pumps in dredging and provides for a two per cent environment cess on earnings from mi­ning. After the policy was announced, the court, on October 27, lifted its ban. While doing so, the court specified that excavation should be limited to a depth of two metres. It asked the state to make offences in this regard non-bailable.

Activists and residents say the government has failed to address key concerns: dredging has damaged the environment, pushed manual excavators to the brink of starvation and ruined fishing. Sumaira Abdulali, Mumbai environmentalist whose Awaaz Foundation filed the first public interest petition in the high court against illegal mechanical dredging in 2006, said the policy only legalises existing practices. “By giving the final authority to SDO, a revenue officer, the policy denies the local community its share in decisions that are vital to its well being,” she said. Residents of the area who depend on manual sand mining accused the government of ignoring their plight. Anis Jalal noted the policy ignores needs of manual miners. “It retains the auctioning of mines which involves large sums of money,” he said.

The state while proposing the policy has ignored the law, which makes sand mining illegal. According to the Coastal Regulation Zone notification of 1991, dredging along coasts is banned across India, except if it is for cleaning the waters. A Maharashtra government order of June 2000 makes environmental clearance mandatory for mechanical dredging. “No clearance had been issued till August 2008 which makes the affidavits filed by Raigad and Ratnagiri collectors, saying there is no illegal dredging false,” said Nasir Jalal of Citizens for Justice and Peace, a non-profit. The state also ignored a report by iit-Mumbai professor Shyam Asolekar in February this year. The report recommendations include measures to prevent environmental damage. An alternative to sand mining would be recycling of construction debris to make artificial sand, the report says (see ‘For minimum impact’).

Rampant mining has ruined fishing, the main means of earning a living in villages along the creek where agricultural land is scarce. Fishermen are incurring losses as barges, which carry sand, tear their nets. Reply to an rti application filed by Abdulali revealed this traffic is illegal. The Maharashtra Maritime Board said it has not issued any permits.

Dredging has destroyed mangroves and contaminated drinking water sources, besides creating noise pollution. “Since last year’s monsoons, all the wells in our village have been contaminated by salt water due to deep dredging,” said Sharif Kawchali of Toradi village in Raigad. Landslides along the bank of the Savitri river killed a number of people in 2005 and 2007.