Contrasting sentiments marked the opening of the 19th World Mining Congress in New Delhi on November 1. President A P J Abdul Kalam warmly welcomed potential foreign investors as he inaugurated the five-day mega meet. But the event got a cold reception from environmentalists and activists, who described it as a forum to plot the plunder of India's natural resources 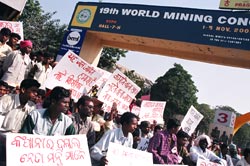 contrasting sentiments marked the opening of the 19th World Mining Congress in New Delhi on November 1. President A P J Abdul Kalam warmly welcomed potential foreign investors as he inaugurated the five-day mega meet. But the event got a cold reception from environmentalists and activists, who described it as a forum to plot the plunder of India's natural resources.

Indeed, the primary objective of the congress -- hosted by India for the second time in almost two decades -- was to give an impetus to the globalisation of mining (read: hardsell it to the developing world). "In Europe as well as the us, high environmental and social costs, coupled with low metal prices, have impacted the economics of mining. As a result, there is a shift from developed nations towards developing countries," observed Leopold Weber of the ministry of economic mining authority, Austria.

India lapped up whatever was thrown its way, even rolling out the red carpet for transnational corporations. "The mining sector has not attracted major investments despite economic liberalisation. Efforts (need to) be made so that the industry's contribution to the gross domestic product should increase from the present 3 per cent to 10 per cent," gushed Kalam.
More than 1500 delegates from 60 countries converged on the capital for the conference. It was organised by the Indian National Committee of the Poland-based World Mining Congress, under the aegis of the Institution of Engineers (India). The participants exchanged views on problems facing the industry, and how technology could be used to meet emerging challenges.

The agenda was so blatantly expansionist that the term 'sustainable development', too, was used in the context of promoting mining -- specifically pertaining to coal. Most speakers tried to create the impression that coal production was the magical key to progress for India. "The country's economy cannot sustain itself without mining it," claimed Gerald Doucet, secretary general of the uk-based World Energy Council.

To be sure, the delegates did give their argument an environment-friendly spin. "For sustainable development, clean-coal technologies have to be adapted. This is the only way to reduce emissions of carbon dioxide," asserted Malcom Keay, chief executive, World Coal Institute, the uk. The majority of the participants believed that the only shortcoming of the mining sector was its greenhouse gas emissions.

The fact of the matter is that in India mining has led to large-scale degradation of the environment, and air pollution is just one of the many problems.
A study shows that out of 90,695 hectares under metal mining in Madhya Pradesh, Orissa and Bihar, about 60 per cent is forest area, most of it comprising dense green cover. That mining companies do not follow ecofriendly practices is quite evident (see table on next page: Problematic mines), because six to nine hectares of land is destroyed for every one million tonnes of mineral produced. Mineworkers' safety also seems to be a low-priority subject for the industry: there are 30-non-fatal but disabling accidents per tonne of mineral produced, and one death per 2.5 tonnes.

It is not uncommon for companies to forcibly uproot local communities from their habitats. According to data presented at the meet by an official of the country's biggest mining company, Coal India Limited, only 0.63 per cent of the 16.40 million people displaced due to mining during 1951-1990 have been rehabilitated so far.

Such issues were brought into focus by those protesting against the congress. They belonged to groups like the Prakrutic Sampad Suraksha Parishad (pssp) of Orissa, Chhattisgarh Mukti Morcha and Adivasi Aikya Vedika of Andhra Pradesh. The activists had gathered at the venue of the mining exposition that took place along with the congress, and demanded the cancellation of all memorandums of understanding between Indian and multinational companies to mine bauxite, iron ore, diamond and coal. They also urged the government to halt the privatisation of the public sector.

Debranjan of pssp described the country's scenario in a nutshell: "Mining in India means filling up the pockets of a few in the name of national interest." No wonder global giants consider the high-stakes sector an attractive proposition.


India produces 84 minerals -- 20 minor, 49 non-metallic, four fuel and 11 metallic minerals -- whose annual value adds up to about Rs 50,000 crore. However, its import bill of minerals and metals for the period 2000-2001 was a whopping Rs 126,710 crore. "This is reason enough for India to mine more," said N N Gautam, a project advisor to the United Nations Development Programme and Global Environment Facility, and one of the delegates at the meet.

Sukumar Bandopadhyay, dean, School of Mineral Engineering, University of Alaska Fairbanks, usa, advocated an "increase in productivity, not in production". At present, the total output per person shift in India is 0.66 tonnes. The figure is 21.25 tonnes for Australia and 33.24 tonnes for the us.

These levels, averred some participants, could be achieved through privatisation. "In many places, the public and private sectors are operating simultaneously. Although the private company makes profits, the public sector undertaking (psu) incurs losses," stated S B Srivastava, head, department of mining engineering, Indian School of Mines, Dhanbad. He attributed the disparity to inefficiency due to corruption and complacency.

But the protesters differed. "Ever since a private company has started operating in our area, it has become difficult to live because of the sharp rise in pollution levels," remarked S K Singh of Chhattisgarh Mukti Morcha, an organisation working with mine victims of the state. "The only solution is to formulate and implement strict laws," pointed out Y Vijaya Bhaskara Reddy of Yakshi, an Andhra Pradesh-based organisation.

The issue of India tightening up its policies was broached at the meet, though briefly. "If technologies can be adapted from the us, so can standards. Things improved in the us because of tough laws. The Indian government should follow suit," emphasised R V Ramani, professor emeritus of mining, Pennsylvania State University, usa.

But Indian representatives thought that drawing comparisons would not be appropriate. "Over the years, there has been tremendous progress. We have been able to do better, both in terms of health standards and community development," said Madhav C Singal, chief general manager, project and planning, Central Coal Fields, Coal India Limited. "The yardstick should be constant improvement, not what others are doing," he added.

R Shreedhar, regional convenor of activist body Mines, Minerals & People, New Delhi centre, countered: "The government is making laws less stringent to facilitate the sale of psus and make a fast buck. Officials are selling companies like balco for just Rs 500 crore. They don't realise the value of the overall wealth that is being transferred."

Those who have borne the brunt of mining also fear that the authorities may dilute the laws further as an investor-friendly gesture. Their apprehensions may not be unfounded. For, the government is said to be keen to amend the Land Acquisition Act, which restricts private parties from acquiring tribal land. "The legal revisions will have an adverse effect, because most companies wanting to invest have a poor track record," observed Debranjan. For instance, Rio Tinto Zinc -- a uk-based company interested in investing in Madhya Pradesh -- has allegedly dumped 89 million tonnes of cyanide-contaminated tailings and 330 million tonnes of waste rock in one of Papua New Guinea's biodiversity hotspots.

Sadly, such details were glossed over at the mining congress. And unbridled growth continued to be the buzzword as the conference drew to a close.