Radio collars for elephants in forests along rail tracks 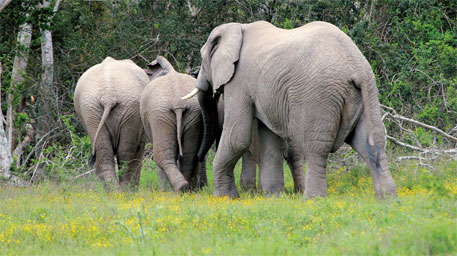 In the wake of the recent deaths of elephants on rail tracks in Odisha, the Union Ministry of Environment and Forests has decided to put radio collars on elephants that are found roaming near rail tracks. The pilot scheme will be started by radio collaring the surviving elephants of the herd that lost five of its members on January 6 after being hit by a moving train.

The elephant herd was traversing in its own corridor when five of its members , including a calf, were mowed down by a speeding Howrah-Chennai Coromandel Express near Rambha railway station in Ganjam district of Odisha. The fatal accident was attributed to lack of coordination between forest department of Odisha and the East Coast Railway.

Environment minister Jayanthi Natarajan called a meeting of forest and railway officials on January 8 to take measures to prevent such accidents. Among several directions she gave to the officials, one was to electronically tag the elephants that use forest patches near railway tracks. “There were reportedly around 20 elephants in the herd that met with the accident. We are planning to electronically tag the remaining 15-16 elephants of the same herd with the help of Wildlife Institute of India and IIT-Delhi.

If the pilot project is successful, then wildlife and forest personnel will be able to keep track of the elephant movements, and warn railway officials well in time to enable them to avoid accident,” said S S Garbyal, director general of forests (wildlife) in MoEF. Often, the time lag between spotting of the elephant, and the information reaching the driver of the train is too little to enable effective action to prevent accidents.

Who will tame speeding trains?

Biswajit Mohanty of non-profit wildlife society of Orissa, however, said the real problem is the speed of the train which has not been addressed yet effectively. “It's difficult to radio collar each and every elephant that may come near the track. What if a new elephant crosses the track other than the ones which are radio-collared. For long, railways officials have been reluctant to slow down the speed of trains which causes the accidents. The patches where wildlife is found near the tracks are just two to three kilometre long. It will not affect the journey time of the trains much,” he added.

It has been reported that the train that mowed down the elephants in Odisha was moving at a speed of nearly 100 km per hour. The impact of the collision was so severe that a mature foetus was pushed out of the womb of a female elephant. This despite the fact that the Indian Railways itself has put up at least 10 display boards, indicating it as elephant corridor.

The minister, in the meeting, pressed upon the railway officials that they should follow the advisory issued by the ministry for the movement of trains in the vulnerable patches where wildlife is found crossing the tracks, which includes slowing down of trains in all such patches. The railway officials, however, emphasized this could be done only for very small stretches, as generally slowing down of trains would be very unviable, both in terms of traffic management and economic implications.