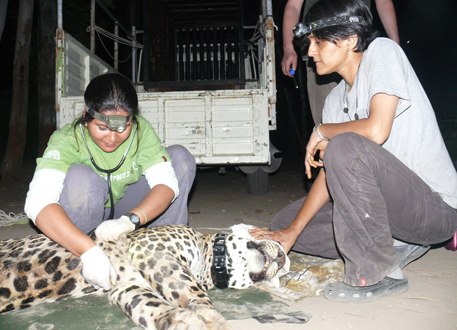 Wild animals, including leopards, are frequently killed by speeding vehicles on the busy Ghodbunder Road in Thane near Mumbai. The road connecting the Eastern Express Highway and Western Express Highway is the most preferred by heavy vehicles bound for north India from the Jawaharlal Nehru Port Trust (JNPT) in Navi Mumbai. One of these heavy vehicles claimed yet another leopard on Thursday night in the Nagla block of the Sanjay Gandhi National Park (SGNP). The cat killed in the incident happened to be the first one in Maharashtra fitted with radio collar. The leopard, a male of about seven years, had made headlines in 2009 when it traveled over 100 km from Bhimashankar Wildlife Sanctuary in Pune district to SGNP in Mumbai.

The assistant conservator of forest (wildlife) for the national park, S G Fale, confirmed the incident and said that the radio collar was found on the body during postmortem. “As soon as we got the information about the accident in the wee hours on Friday, a team of SGNP, comprising veterinary doctors rushed to the spot. The carcass was then taken to the hospital at SGNP for autopsy,” Fale said.

Wildlife biologist and research associate at the Centre for Wildlife Studies and Asian Nature Conservation Foundation in Bengaluru, Vidya Athreya, had fitted the leopard with the radio collar in 2009 after it was rescued from a well at a village near Pune. Named Ajoba (Marathi word for grandfather because of his gentle behaviour), the leopard was released in Malshej area of Bhimashankar Wildlife Sanctuary on April 29, 2009.

The forest department officials who were tracking the signals from the radio collar found that Ajoba had reached Nagla block of SGNP on May 31, 2009 and was reported to have settled there. “The radio collar developed snag between July 10 and 17, 2009 and we lost track. Since then there was no trace of Ajoba till he was found dead on Ghodbunder Road in the wee hours of Friday,” Fale said. According to Athreya, since the Ghodbunder Road cuts through SGNP, the forest department should provide underpasses at strategic location along the stretch of the road passing through wildlife corridor.

The radio radio collar was fitted on Ajoba under ‘Project Waghoba’ (Waghoba is Marathi word for tiger, children call a tiger Waghoba in Marathi), the first ever such project in Maharashtra to track the movement of leopards for better understanding man-animal conflict. The project is supported by the forest department of the government of Maharashtra.