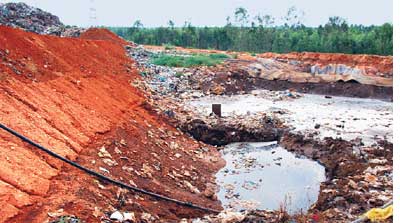 a meeting between the residents of Mavallipura village in Karnataka and Bengaluru municipal officials on October 7 ended in a row when the residents refused to let the officials go unless they promised to close down a waste dumpsite in the village. They alleged the illegal landfill, used to dump Bengaluru citys waste, is contaminating their waterbodies, fouling paddy fields and making them ill.

The officials were released after police intervention and cases have been lodged against several villagers. Two leaders of the agitating group, Dalit Sangarsh Samithi (dss), were arrested the next morning and later released on bail. B Srinivas, one of the arrested villagers, said the corporation has been illegally dumping Bengalurus waste 20 km away in Mavallipura since 2003 after a village resident, Bylappa, gave the corporation some 16 ha on lease. Bylappa claimed the land belonged to him.In 2005, an enquiry by Environment Support Group (esg), a non-profit, revealed the land is forestland. The corporations contract with Bylappa was illegal, said Leo Saldanha of esg. 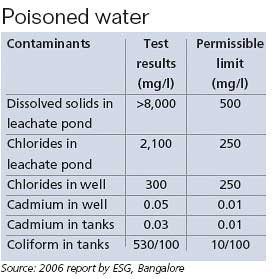 Following this revelation in 2007, the corporation identified a 40 ha land adjacent to Bylappas land and gave it to Ramky Enviro Engineers, a waste management company in Hyderabad, to develop a landfill facility. The new landfill is also illegal, alleged Srinivas. It is the community grazing field of the village. Moreover, Ramkys landfill does not conform to waste management rules: it is not lined at the bottom and leachate (liquid discharged from landfill) often contaminates groundwater, he said. The villagers grew angry when in early October the leachate pond breached its boundary and fouled waterbodies and farmlands in the village. Most villagers now suffer from water-borne and respiratory diseases, said Dhanraj of dss. The pollution has also affected seven other villages where kidney failure, cancer and meningitis have become common, said Dhanraj.

Saldanha added: The region is a critically-polluted area in Karnataka. Tests conducted in 2006 showed high-levels of toxins in water; 100 trucks used to dump waste in the landfill every day (see box). In the past three years, the number of trucks dumping waste has doubled. And the toxin levels must have gone up several times. Executive director of Ramky Enviro Engineers, M G Reddy, said the landfill is scientifically managed; a lining prevents leachate from fouling the groundwater.

Municipal commissioner B L Meena acknowledged the pollution. As per his order, insecticides were sprayed across the village and doctors visited for health check-ups. But the villagers want the landfill to be closed for ever. They also want the corporation to compensate and rehabilitate those suffering from diseases caused by years of pollution.