Experts says the Bill, which is intended to protect camels, does not address concerns of camel keepers 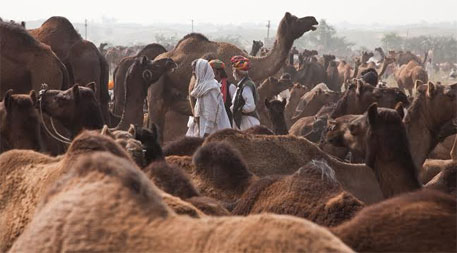 Rajasthan Legislative Assembly has passed by a voice vote The Rajasthan Camel (Prohibition of Slaughter and Regulation of Temporary Migration or Export) Bill, 2015. The government had introduced the Bill in the Assembly this past week. The Bill aims to contain the steady decline in the population of camels in the state.

According to the Bill's provisions, offenders will be punishable with rigorous imprisonment of at least a year. This term may extend to five years with a fine of up to Rs 20,000.

The population of camels in India has declined sharply. According to the livestock census of 1992, there were around 750,000 camels in the country. This number fell to only 330,000 in 2012, indicating a decrease of more than 56 per cent. A majority of these camels are found in Rajasthan.

Last year, Rajasthan declared the camel as a state animal, in addition to the chinkara. The state cabinet also approved of a move to prepare an Act for the protection of camels and prevent them from being “smuggled” from the state.

The Bill proposes to place restrictions on migration of the animal to other states as the government says they are often transported for slaughter.

Experts say the Bill is not likely to have the intended impact. llse Kohler-Rollefson of Pali-based Lokhit Pashu-Palak Sansthan (LPPS), an organisation which works with pastoral communities, says, “The restrictions on migration pull the plug on the current camel economy. The only income camel keepers had was to sell their male camels. The Bill is also not creating any other positive incentives for the keepers.”

Down To Earth had reported that Raikas, the traditional camel keepers of Rajasthan, are finding it increasingly difficult to sustain their herds. The impending legislation and fear of legal action has caused many camel buyers to keep away from the annual Pushkar Fair. Prices of adult male camels have crashed and keepers earn barely Rs 10,000-12,000 per animal.

A larger problem affects the state of camels and other livestock in Rajasthan. Increase in irrigation and the consequent rise in intensive agriculture has led to a drop in the availability of grazing lands for these animals.

Raikas also don’t have free access to forests anymore. A Supreme Court ban on all human uses, including grazing, in sanctuaries has meant that livestock keepers have lost their traditional grazing grounds. Camels end up being chronically hungry and fall prey to diseases.

Anil Kumar Chhangani, associate professor of environmental science at Bikaner’s Maharaja Ganga Singh University, says, “Since there aren’t enough grazing grounds in the state, Raikas migrate to parts of Gujarat, Maharashtra and Madhya Pradesh in search of fodder. They spend eight months there. How will you stop that migration? The government is not feeding them at home, grazing is banned in national parks and forest areas and the new Bill restricts migration…in a way, this is suicide.”

Meanwhile, the National Research Centre on Camel (NRCC) in Bikaner is trying to develop camel milk and milk products as a new economic incentive for the Raikas. Through thorough research, NRCC has established that camel milk is a more complete food than cow or buffalo milk. The milk has proven benefits in the treatment of Type 1 diabetes, hypertension, tuberculosis and even autism. But lack of recognition from authorities has stalled the development of this product into a full-fledged business model.

NRCC Director N V Patil explains, “We have put up our case at the Food Safety and Standards Authority of India (FSSAI). But it has still not approved it as food for humans. The US does not have a camel population. And yet, camel milk has been approved by the US Food and Drugs Administration.”
Read the full story here.