Policy also talks about land allocation, a clause not mentioned in any other states’ policy till now 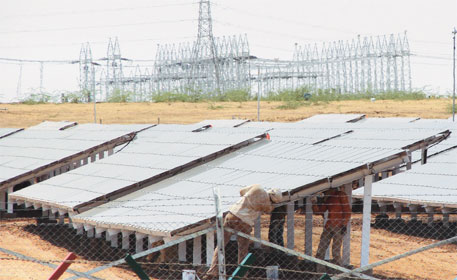 The government of Rajasthan has recently released a new solar policy, aimed at developing 25,000 MW of solar energy to attain self sufficiency. Rajasthan Solar Policy 2014 would act as an extension to Jawaharlal Nehru National Solar Mission (JNNSM) and Rajasthan Solar Energy Policy, 2011 and will remain in force until dismantled.

Vasundhara Raje, chief minister of Rajasthan, says, “I am confident that the new state policy shall usher in an environment that is congenial to investors and also be an engine to draw in the much required investment in the state.” The idea for the state is long term energy security, ecological security by reducing emissions, generating employment and investing in a solar centre for research and development.

Clarity on land allocation a priority
The policy also carries a clause about land allocation. This clause is not available in any other states’ policy. The energy minister of the state, Gajendra Singh, says that “abundant availability of land at the cheapest rate and an ‘investor friendly’ policy makes Rajasthan the most preferred state for solar power generation.” Allocation of government land for either solar parks or a solar power project has been streamlined in the policy (See table)

Water supply is an important issue this policy has specified clear rules on. The plants would be provided with guaranteed water supply from the Indira Gandhi Nahar Project (IGNP) or the nearest water source available for solar thermal project. The Rajasthan government, back in 2011, had directed INGP to set aside water supply (12 cusec for 400 MW of solar thermal) for five solar power companies signed up under National Solar Mission.

The plan for the state is ambitious, but it has not imposed a deadline on achieving the target of 25,000 MW of solar power. Also, since the policy is accounting for projects set up under JNNSM, REC/RPO, open access and captive use, meeting this target, is very well possible.