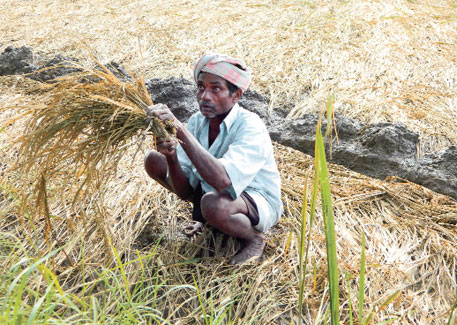 The RBI, after holding an independent verification of the state's official data on farm yields, felt that the yields were reasonably good and there was no reason for loan relief. Crop yields should be less than half the normal for banks to consider farm loan relief. RBI said there was no proof for serious yield loss in those regions declared as calamity-stricken by the state government. It also said farmers' savings in banks were increasing. "It does not appear feasible for us to conclude that distress is widespread, warranting rescheduling of loans in the form and manner in which it has been asked for," said RBI Executive Director, Deepali Pant Joshi, in the letter to Andhra's chief secretary, I Y R Krishna Rao.

Farm loans overdue in Andhra Pradesh are pegged by banks at Rs 87,000 crore. Farm loan waiver was the major election promise through which the ruling Telugu Desam Party (TDP) came to power in the recently held elections to the state Assembly. On July 21, chief minister N Chandrababu Naidu, after a cabinet meeting, announced a farm loan waiver of Rs 1.5 lakh per family. The waiver included crop loans and loans on gold for agriculture purposes. The total amount to be waived off under this scheme comes to around Rs 43, 000 crore.

The government enhanced the loan amount limit to R 1.5 lakh by going against the recommendation of the committee appointed by the government to look into the modalities of loan waiver. The committee headed by P Kotaiah, former NABARD chairperson, had recommended that the limit should be fixed at Rs 1 lakh. The government's justification for enhancing the limit was that this would include 97 per cent of the borrowers. Naidu said during the announcement that the state was taking the waiver decision even while it was facing acute financial crunch as an effort to protect crisis-ridden farm sector. The state government had requested the apex bank to restructure the loan repayment for seven years.

'Only big farmers will benefit'

Many organisations working closely with farmers in Andhra Pradesh and Telangana had pointed out that loan waiver would benefit only big farmers and land owners who easily get crop loans from the banks. "Loan waiver will not benefit marginal farmers, mainly poor communities like dalits, adivasis, tenant farmers and the landless poor who live in pieces of land assigned to them for cultivation," points out G V Ramanjaneyalu of Centre for Sustainable Agriculture, a Hyderabad-based non-profit. These sections of people still don't have adequate access to crop loans and they depend heavily on the local money lenders who often lend money at exorbitant interest rates of up to 40-50 per cent, he points out. "On the pretext of protecting the crisis-ridden farm sector, the government is favouring big farmers and land lords who avail loans but lease out their land to others," says Ramanjaneyalu. In the case of crop loans, only about 25-30 percent could be genuine cases, adds he.