Spending too much time on the Internet is causing mental health disorders. Is India prepared to tackle the addiction? 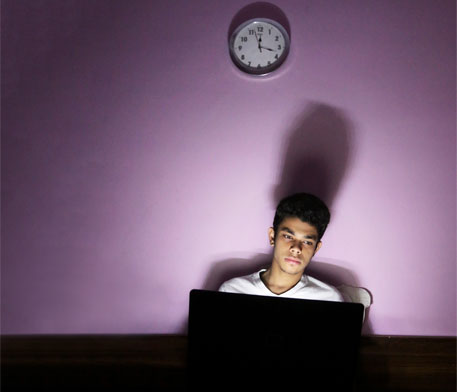 It all began when he was in the 11th standard. His inquisitive mind led him towards the Internet, and he started spending more time in front of the computer. Long hours of sitting took a toll on his health and he developed back pain. Yet the 16-year-old boy in Pune could not stay away from the virtual world. By the end of that year, he had downloaded data worth Rs 12,000. One day, when his mother tried to unplug the Internet connection, he stabbed her. She was saved, but the boy’s obsessive behaviour kept worsening. His parents took him to Chaitanya Mental Health Care Centre (CMHCC) where he was diagnosed with Internet addiction. He was cured after three months of behaviour modification therapy and counselling sessions along with his family.

Rony George, director of CMHCC, says those who use Internet for 14 to 15 hours daily, or to the extent that their everyday routine gets affected, can be categorised as Internet addicts. He says his centre receives four to five Internet addicts every month; most are in their teens.

With more than 243 million Internet users by November 2014, India ranks third in terms of Internet usage, following the US and China, according to internetlivestats.com, which provides information on Internet users. However, there is no consolidated data to show the extent of addiction to the technology in India. Health experts say with explosive use of the Internet in the last decade and growing dependence on it, a good number of people with access to multimedia could be suffering from the behavioural disorder.

In 2013, a study funded by the Indian Council of Medical Research (ICMR) surveyed 2,755 people in the age group of 18 to 65 in urban areas of Bengaluru. The researchers found that 1.3 per cent people were addicted to the Internet, 4.1 per cent to mobile phones, 3.5 per cent to social networking sites, 4 per cent to online shopping, 2 per cent to online pornography and 1.2 per cent to gambling. The study was published in Asian Journal of Psychiatry in May 2013.

That year, Deepak Goel, psychiatrist with Topiwala National Medical College and B Y L Nair Hospital in Mumbai, found that 0.7 per cent of the 987 students from the city who participated in the study, were Internet addicts. The study was published in Indian Journal of Psychiatry in 2013.

It cannot be a coincidence that India’s first centre to treat Internet addiction has opened in the cyber city of Bengaluru. Since April 2014, when the National Institute of Mental Health Neurosciences (NIMHANS) opened the centre, it has treated 25 children. Manoj Kumar Sharma, associate professor at NIMHANS, says there are still many who are either reluctant to come forward or do not report it due to lack of awareness about treatment facilities.

In the US, which has the highest Internet usage, the American Psychological Associa tion (APA) is trying to understand the disorder and its treatment. So far, APA has only defined Internet Addiction Disorder and says it is a pattern of using the Internet to the extent that it can cause dysfunction and unpleasant internal reactions just in two months. APA has listed seven criteria for diagnosis, which includes tolerance, withdrawal symptoms, using Internet for longer hours than one had initially planned to, a constant desire to control behaviour, spending considerable time on matters related to the Internet, reduction of social, occupational and recreational activities because of Internet use and continued use despite the knowledge of negative effects. An individual showing any three symptoms can be categorised as Internet addict, it says.

The US Navy’s Substance Abuse and Recovery Programme (SARP) recently treated a 31-year-old man, addicted to a particular technology, Google Glass. The patient used Google Glass for 18 to 19 hours a day and exhibited irritability and frustration when he was not able to use it. He also developed an involuntary movement disorder: the forefinger of his right hand would often rise without his knowledge to tap his temple, as if to enable Google Glass. His condition has improved after three months of residential treatment,” writes Andrew Doan, head of addictions and resilience research at SARP, in the September issue of Addictive Behaviours. “It is only a matter of time before research and treatments catch up,” Doan says.

In its effort to contain the addiction, China set up an Internet Addiction Treatment Center in the General Hospital of the Beijing Military Region in 2004, where at least 5,000 youths addicted to the Internet have been treated so far. As per a media report, the hospital, in its five years of existence till 2009, had used electric shock therapy on as many as 3,500 Internet addicted patients. Later, its administration banned this treatment and is now focusing on behavioural modification therapy.

In 2010, the South Korean government announced a national programme to contain the addiction after it realised that more than 2 million children—two in every 10—suffering from Internet addiction.

The 2013 study by Deepak Goel has found a clear relation between psychological distress and addictive use of the Internet. Those excessively using the Internet were suffering from anxiety and depression, notes the study. Researchers in Turkey have also found a similar correlation. They say that for the 15 per cent of students in the country who can be categorised as Internet addicts, surfing the world wide web was a way to overcome a swathe of issues—peer pressure, academic stress, boredom, poor performance in school, depression and negative self-perception.

The study was published in European Journal of Public Health in May 2013.The researchers recommend that Internet addiction can be prevented by building a healthy living environment around them, controlling the computer and Internet usage, promoting book reading and providing treatment to those with a psychological problem.

Sharma says children are more vulnerable because they get exposed to a huge amount of varied content on the Internet and are usually not aware of the risks in accessing it. He mentions one of his patients who used to send almost 300 messages to his friends in a day. He started feeling pain in his finger tips but was unable to stop messaging. Sharma says guardians have a major role in checking these addictions. They need to keep a tab on their children’s activities.

There is also a need for more research and awareness to understand the real picture of Internet addiction in India. While enjoying their Internet activities, children lose control over their routine activities and their performance goes down. They start withdrawing from real world.