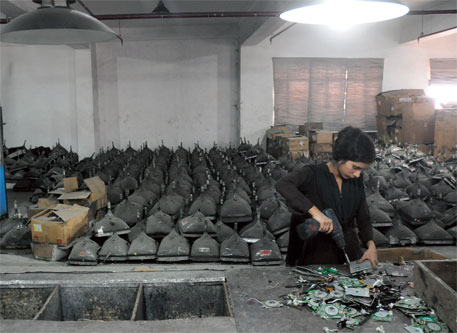 The International Resource Panel, hosted by the United Nations Environment Programme (UNEP), has called for a rethink on recycling practices so as to minimise the adverse negative environmental impacts of metal production. In its two reports released on Thursday, the panel says recycling requires significantly less energy per kg of metal produced compared to primary production. It also decreases the overall local impact of mining.

The two reports on potential environmental impacts of metal flows and cycles were released during the 12th International Resource Panel (IRP) meeting—High Level Dialogue on Resource Efficiency and Sustainable Management of Metal Resources—held on April 24, in Berlin, Germany.

The report, titled Environmental Risks and Challenges of Anthropogenic Metals Flows and Cycles, outlines the environmental challenges of metals and potential contribution of recycling to mitigate them. The second report, Metal Recycling - Opportunities, Limits, Infrastructure, details improvements required to be made to metal recycling systems. The reports suggest that only a systemic approach—for example, promotion of resource efficiency, improved materials recycling and life cycle thinking—is appropriate to meet the challenges of the 21st century.

How to meet future demand for metals

IRP, in the reports, foresees the need for metal may rise almost 10 times. This massive growth in demand will require a rethink of recycling practices to offset negative environmental effects of the process. "An increased share of recycling of metals can be expected to alleviate some of the adverse environmental pressures from the use and production of metals," said Ernst Ulrich von Weizsäcker and Ashok Khosla, co-chairs of the IRP, in a joint statement. "However, increased recycling rates alone will not be sufficient but need to be accompanied by a levelling off of the demand curve for metals," they added.

"As populations in emerging economies adopt similar technologies and lifestyles to those currently used in OECD (Organisation for Economic Co-operation and Development) countries, global metal needs will be three to nine times larger than all the metals currently used in the world," said UN under-secretary-general and UNEP executive director Achim Steiner.

"A far more sophisticated approach is urgently needed to address the challenges of recycling complex products, which contain a broad variety of interlinked metals and materials," he added. "Product designers need to ensure that materials such as rare earth metals in products ranging from solar panels and wind turbine magnets to mobile phones can still be recovered easily when they reach the end of their life."

Metals are an essential part of the global economy as core raw materials for infrastructure. Demand is expected to remain strong in the future: in developing countries because of rapid industrialization, and in developed countries because of modern technologies. While renewable energy technologies – as part of the transition to an inclusive green economy – cut greenhouse gas emissions from metals production, they are likely to increase demand as they are more metal-intensive than fossil-fuel energy sources, says a press statement issued by UNEP.

According to the reports, the integrated use of metals and their compounds cause local impacts from mining and use 7-8 per cent of the global energy supply. There are also issues related to metal emissions from sources such as fossil fuels and phosphate fertilizer, and the need for a final disposal solution for certain metals where supply has exceeded demand.

Recycling is a viable solution as it requires significantly less energy per kilogramme of metal, and also reduces the impact of mining. Recycling slows down the need for exploiting low-grade ores – a more energy-intensive process that is likely to become more common as demand grows – and can help ward off future scarcity of certain commonly used precious metals, reads the report.
Theoretically, metals can be recycled almost indefinitely, thus presenting a valuable opportunity to reduce environmental degradation, energy and water use and contribute to the transition to a low-carbon, resource-efficient green economy. However, the growing complexity of products makes it difficult to extract and reuse all valuable metals due to the laws of physics and related economics. For example, a mobile phone can contain more than 40 elements, including base metals such as copper and tin and precious and platinum-group metals such as silver, gold and palladium.

Eye on end of life products

In order to boost historically low recycling rates, a global move from a material-centric to a product-centric approach, in which recycling targets specific components of a product and their complexity at its end of life (EoL) and devises ways to separate and recover them, is essential, reads the press statement.

Optimizing the recycling of EoL products can avoid losses in efficiency throughout the chain of recycling. The global main-streaming of such a product-centric view would be a remarkable step towards efficient recycling systems, resource efficiency and a green economy.

"Our aim must be to beak the raw materials spiral by using materials more consciously," said German federal environment minister Peter Altmaier. "In Germany, raw materials are already applied much more efficiently than ten years ago. But we can achieve even more: By 2020 we want to double raw materials efficiency compared to 1994 levels."

According to the reports, the potential for recycling is enormous when the amount of electrical and electronic equipment waste being generated is considered. Such waste is estimated at 20 to 50 million tonnes, or three to seven kilograms per person, each year. In Europe alone, the amount of such waste generated is about 12 million tonnes per year. This is expected to increase in the coming decades at a rate of at least four per cent annually-about three times higher than the growth of municipal waste.

However, recycling rates have been consistently low – a previous report by the IRP found that less than one-third of some 60 metals studied have an EoL recycling rate above 50 per cent and 34 elements are below one per cent recycling.

The reports recommend certified systems based on Best Available Technologies (BATs) and other measures increasing energy and entropy efficiency for mining as well as recycling industries have been developed and need to be applied on a global level. These techniques differ between regions, and do not necessarily need to be high technology. The reports also suggest weight-based targets hinder rather than promote recycling of the many critical elements in complex products, usually present in very low concentrations. Priorities have to be set for different metals, such as base metals, special metals, critical-technology metals, etc. Primary production energy-efficiency increases can be achieved by improved process efficiency and use of waste streams (fly ash, sludge, slags and precipitates) as sources of metals, the report recommends.