THE energy drink that promises to give you wings is soaring high despite attempts by authorities to ground it. Red Bull has been pulled up on a couple of occasions for exceeding the prescribed caffeine limit in recent years.

But the beverage manufacturer, Red Bull India Pvt Ltd, managed to evade prosecution by moving court and claiming its product should not be treated as a carbonated drink like Coca Cola or Pepsi. The company wants energy drinks to be treated as proprietary food product for which standards are yet to be evolved in India. Red Bull, first created in Thailand in 1962, is sold in over 160 countries.

Sample analysis of Red Bull by the Central Food Laboratory in Mysore in 2005 revealed it had 329 parts per million (ppm) or 329mg/litre caffeine content. The Prevention of Food Adulteration (PFA) Act prescribes a cap of 200 ppm for carbonated beverages; it was reduced to 145 ppm in 2008. Red Bull makers contested the laboratory findings, arguing energy drinks are not carbonated drinks and don’t need to adhere to caffeine limits prescribed for soft drinks.

Red Bull is promoted as an energy drink because of its composition and the fact that it acts as an energy booster. According to PFA Act of 1954, energy drinks have no prescribed standards and are labelled as proprietary food. But an amendment to the rules framed under the act—rule 37-A(2)—in 2009 stipulated that all rules and standards prescribed under the act would be applicable to proprietary food as well. This meant the caffeine content in Red Bull had to be cut to 145 ppm. In February 2010, the Madras High Court declared Red Bull did not conform to PFA rules (see ‘Red Bull seizures’,). The company challenged the ruling before another bench of the high court and obtained a stay order.

 The Food Safety and Standards Authority of India (FSSAI), established under the Food Safety and Standards Act 2006, refused to comment on the status of Red Bull under the law, saying the case is sub judice. It is unclear whether the authority is planning to take its manufacturer to task for defying the law but one thing is clear—the FSSAI is planning to create a new category of beverages to accommodate energy drinks and allow them to use more caffeine in their products. The energy drinks market in India is worth Rs. 200 crore and it has grown without any regulations.

Red Bull is the most popular energy drink; the other players in the market include Coca Cola’s Burn and Goldwin Healthcare’s Cloud 9. The only draft relating to regulations for energy drinks, posted on FSSAI website, shows the scales are tipping in favour of energy drink producers. The draft says the daily intake of caffeine through carbonated beverages is not very high and that people consume more caffeine by drinking tea and coffee.

The authority’s expert committee on energy drinks has said the justification of a caffeine cut-off limit of 320 ppm needs to be ascertained. This is the least amount necessary for an energy drink to serve its purpose, said a beverage company official.

Arvind Varma, secretary general of the Indian Beverage Association, said energy drinks have a “different formula profile, designed to provide specific functionality, such as enhancing performance”. International regulations treat energy drinks as separate from carbonated drinks and permit higher caffeine content in them than in carbonated drinks, he added. The association is in favour of new standards for energy drinks. “The setting of standards for energy drinks category should be science- based and take into account relevant best practices,” said Varma.

 Consumer activists say the term energy drink is a misnomer. Y Venkat Ramana of the National Institute of Nutrition in Hyderabad explained these drinks have a greater psychosomatic impact than a physical one. “Energy drinks contain chemical compounds like taurine, glucunalactone (a food additive) and guarana in addition to caffeine. These can be toxic and affect renal and circulatory systems if consumed in high quantities,” said Ramana, an assistant director in the national institute’s department of work physiology and sports nutrition. Ashim Sanyal, head of VOICE, a consumer advocacy group in Delhi, added, “Since it has such high levels of caffeine, we are demanding the product should be labelled as a caffeinated drink, not energy or sports drink. The consumers should at least know what they are drinking.”

Energy drinks manufacturers are in favour of labelling and laws modelled on lines of the system followed in Australia and New Zealand (see ‘Caffeine limit’) but activists say labelling in India needs to be discussed threadbare. “We believe that in India labels say the convenient truth. They should state the scientific truth and that should be done through a labelling committee. But for that FSSAI has to start functioning first,” said Vasundhra Pramod Deodhar of Mumbai Grahak Panchayat, a consumer group and a member of FSSAI.

Beverage makers believe they are being targeted unnecessarily. “People consume more caffeine from coffee than from energy drinks. Yet energy drinks are attacked as they are far more glamorous,” said Sameer Barde, a food industry representative in the Federation of Indian Chambers of Commerce and Industry and a member of FSSAI’s central advisory committee. A cup of black coffee has 32 mg/100 ml or 320 ppm of caffeine, said energy drink makers, which is the same as in Red Bull (see table). Nutritionists differed. 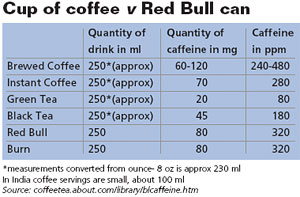 Coffee is consumed in small quantities over a period of time. A can of energy drink packs much more caffeine. “There is a sudden burden of chemicals on the body if one drinks a whole can and that is harmful,” said Ramana. He cited a growing trend among children of consuming energy drinks in place of carbonated soft drinks.

“This consumption might represent an increase in daily caffeine exposure,” he said. Consumption of 160 mg caffeine a day from a half-litre energy drink can is equal to 5.3 mg/kg bodyweight for a 10-year-old weighing 30 kg. Caffeine consumption beyond 5.3 mg/kg bodyweight is unsafe, said Ramana. In children, daily consumption of even this amount can induce behavioural changes, such as increased arousal, irritability, nervousness and anxiety. The Diagnostic and Statistical Manual of Mental Disorders states that caffeine consumed over a period of time can induce intoxication, anxiety disorder and sleep disorder.

An August 2008 study of the Cardiovascular Research Centre in Australia found energy drinks could increase risk of strokes and heart attack. Consuming even one can of Red Bull could lead to blood turning sticky, increasing chances of clotting, the study said.