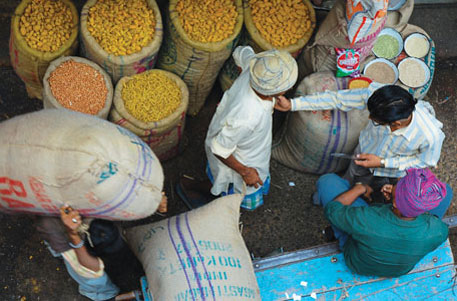 The high level committee set up to look into the restructuring of Food Corporation of India has recommended reducing the number of beneficiaries under the Food Security Act—from the current 67 per cent to 40 per cent. It has also recommended allowing private players to procure and store food grains, stopping bonuses on minimum support price (MSP) paid by states to farmers, and adopting cash transfer system  so that MSP and food subsidy amounts can be directly transferred to the accounts of farmers and food security beneficiaries. The panel estimates the government will save Rs 33,000 crore by adopting cash transfer method, by avoiding costs on procurement, storage and distribution.

The committee chairperson, Shanta Kumar, had submitted the report to Prime Minister Narendra Modi on January 20.

After coming to power, Modi had set up a six-member committee to suggest restructuring or unbundling of FCI to improve its financial management and operational efficiency in procurement, storage and distribution of food grains. Former Union consumer and food distribution minister and present Bhartiya Janata Party member of Parliament, Shanta Kumar, was chosen to head the committee.

Speaking to mediapersons on Thursday, Kumar claimed the recommendations would prove to be a magic wand for removing farm and hunger distress in the country.

“If it is implemented, it will bring a magical change,” he said. “The report has path-breaking recommendations on food and farm security,” he added.

It has recommended measures to ease entry of private players in the business of procurement of grains. This would be done by putting an end to the practice of states giving bonuses on crop MSP to farmers, and restricting taxes and statutory levies on food grains at uniform to 3 per cent of MSP.

“Such streamlining will save around Rs 4,000 crore in subsidies,” said Ashok Gulati, member of the committee.

The committee has also recommended abolishing levy rice. The Union government has already taken steps to do away with procurement of levy rice from rice mills. Under levy rice policy, government buys certain percentage of rice (varies from 25 to 75 per cent in states) from the mills compulsorily, which is called levy rice. Mills are allowed to sell only the remainder in the open market. If the recommendation is accepted, then mill owners can sell all of the milled rice in open market.
The committee has recommended full deregulation of fertiliser sector and calls for providing cash fertiliser subsidy of Rs 7,000 per hectare to farmers.

The committee has recommended outsourcing of stocking of grains. The committee calls for setting up of negotiable warehouse receipt (NWR) system. In the new system, farmers can deposit their produce in these registered warehouses and get 80 per cent of the advance from bank against their produce on the basis of MSP.

The committee has recommended revisiting MSP policy. It says the government should focus on MSP of pulses and oilseed. This recommendation comes in the backdrop of skewed MSP policy, which concentrates only on wheat and rice. Rest of the 21 commodities, other than wheat and rice, get neglected.

The committee also recommends clear and transparent liquidation policy for buffer stock. FCI should be given greater flexibility in doing business; it should offload surplus stock in open market or export, as per need, says the report.

The most important highlight of the report, however, is the recommendation on food security. It recommends a relook at coverage of 67 percent of population under the existing Food Security Act. It recommends restricting food security benefit to 40 per cent of the population. It also seeks to link subsidised price of cereals to MSP price. The amount of grains entitlement per person should be increased to 7 kg from existing 5 kg under National Food Security Act, says the report.
“Linking subsidy with MSP will support government in containing fisical deficit,” said Gulati.

The committee recommends gradual introduction of cash transfers in the public distribution system.

“We are recommending to start cash transfer with large cities with more than one million population then extend scope to surplus grain states and then to deficit states,” said Kumar.

Scrapping what is broken

The high-level committee has argues that there is a sound basis for its recommendations. It observed:

How much grains does FCI procure?

Social protection for food security: a report by the High Level Panel of Experts on Food Security and Nutrition