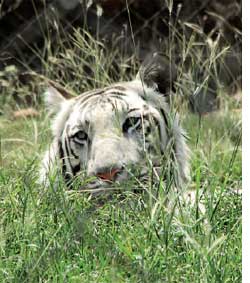 The big cat in Bhopal park suffers from cancer

every morning forest officials drive Mamta Jain and her six cousins to an enclosure at Van Vihar National Park in Bhopal. The group settles down around the enclosure and starts giving reiki, the Japanese healing technique, to Rini, an 18-year-old white tigress, to ease her pain. Rini is suffering from cancer and is also undergoing chemotherapy.

"This is the first case of cancer being diagnosed in a big cat in captivity and her undergoing chemotherapy and reiki," said A K Bhattacharya, director of the park. Mamta Jain and her cousins have been giving reiki to the tigress for a month and a half.

In the first week of May 2008, Scot Sitino and Josva Dean, veterinary doctors from the us, visited the park to examine the big cats. According to A K Bhattacharya, director, Van Vihar, the two detected a mole under Rini's right eye and suspected it to be malignant. On May 10, she underwent surgery to remove the mole, which was confirmed to be malignant.

The American doctors advised euthanasia for Rini, but Bhattacharya opted against mercy killing and sought the help of cancer specialists. Since then Rini has been examined by various oncologists and veterinary doctors from Mumbai, Wildlife Institute of India, Dehradun, and Bhopal. Purvish Parikh, an oncologist and haematologist from Mumbai who is treating Rini, says, "Rini's cancer is in the third stage. Chemotherapy seems to be helping her as she seems to be in less pain. She is eating better and her tumour is not regressing."

Parikh, however, warns against having high hopes about Rini's recovery. "One must realize that Rini is 18 years old, equivalent to a human age of 80 years. Chemotherapy is not likely to cure her completely."

Jain and her cousins are also doing their bit for the tigress who was brought to Van Vihar from Nandankanan Zoo near Bhubaneswar as a young adult of four years. The group sought special permission from the park to try the alternative therapy to ease her pain. Jain claims "the tigress seems to be accepting reiki well. She seems relaxed."