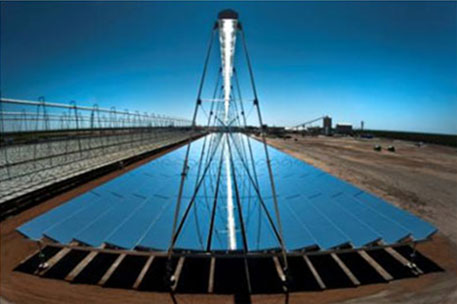 Rajasthan Sun Technique Energy, a subsidiary of Reliance Power, has commissioned its 100 MW concentrated solar power (CSP) plant. The plant is the largest plant based on the linear fresnel technology.

The 100 MW CSP plant becomes the second CSP plant to be generating power in India. The first one was 50 MW plant of Godavari Green Energy Limited using parabolic trough technology. It was commissioned in August 2013. Reliance Power said in a statement, "the company has successfully synchronised the Rs 2,100 crore 100 MW solar CSP project with the grid, and power generation has commenced.” All the solar-thermal plants missed deadlines of commissioning by May 2013.

The project was one of the seven awarded in December, 2010 under Jawaharlal Nehru National Solar Mission Phase I Batch I. The tariff quoted at the time of bidding was Rs 11.97 per kWh. However, in January 2014, Reliance Power, Lanco, and others, filed separate petitions, seeking higher tariffs on the basis that the direct normal irradiance (DNI) data provided by the government was faulty, which has resulted in lower power generation. The project developer has signed a power purchase agreement for 25 years.

The plant is based on Areva's compact linear fresnel reflector (CLFR) technology. When compared to other CSP technologies, fresnel system yields higher power cycle efficiency and less pumping losses because of the simple nature of the plant. The biggest advantage is that it requires lesser area to operate in comparison to other technologies for the same power output.

The reason for delay has not been clear since the plant based in Dhursar in Jaisalmer, Rajasthan has been in pre-commissioning stage since November 2013. Hem Raj Sharma, the project director, said, “there have been no technological glitches even though the technology is new.”

This is the first and the last large-scale CSP plant using Areva technology since Areva withdrew from the solar business last August.