Relief and rehabilitation is next big challenge

Cyclone Phailin leaves behind a trail of destruction; people complain they have received no relief supply 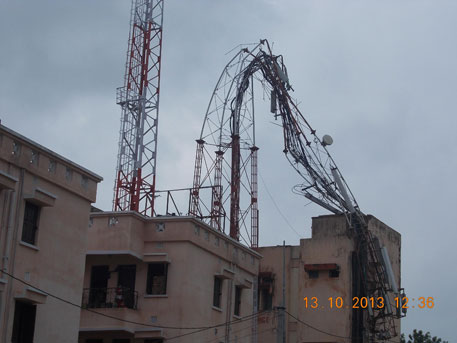 The death toll in Odisha, which was struck by cyclone Phailin on Saturday night, was contained to18 because of timely evacuation of people residing in seaside areas and disaster preparedness on part of government authorities. Chief Minister Naveen Patnaik termed Phailin as “zero-loss of life” cyclone; the state government evacuated nearly 700,000 people from seaside villages to safer places.

As the cyclone receded on Sunday morning, rehabilitation of the affected people emerged as the next big challenge for the government. People in Ganjam district, which bore the brunt of the cyclone, are facing acute drinking water shortage.

The cyclone left behind a trail of destruction—trees were uprooted, power cables snapped and vast areas remained submerged under water, affecting thousands. People complained they received no rations and water.

“On October 29, 1999, around 11,000 people perished in the coastal districts of Kendrapada and Jagatsinghpur. But only 18 persons died on Saturday when Phailn struck Odisha coast.  We evacuated around 700,000 persons from vulnerable areas and provided them safer shelter in around 20,000 cyclone shelters, schools, colleges and other safe places. Media persons also helped the state government to create awareness among the people about the impending cyclone,” Odisha revenue minister Surya Narayan Patro said.

Around 155,000 houses have collapsed in Ganjam district. About 20,000 mud-walled thatched houses were damaged in Kendrapada district, added Patro. Around 3,000 cattle perished in Ganjam, Kendrapada and Jagatsinghpur. 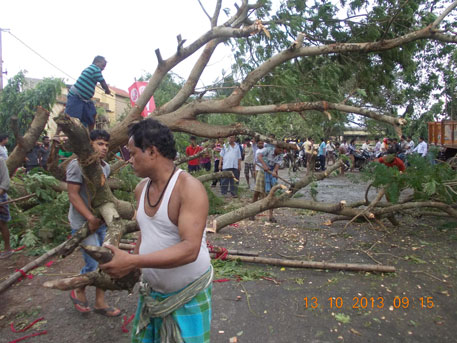 The putrid smell of animal carcasses filled the air, and saline water from the sea got mixed with river water to inundate villages, leading to a serious drinking water crisis in Goda, Dahibar, Japa and other villages in Jagatsinghpur district. Large number of people complained that relief had not reached them.

There were reports of some miraculous escapes, too. Eighteen fishers from Tamil Nadu who were stranded mid-sea following snag in their mechanized fishing vessel managed to swim to safety. The coast guard had tried to rescue them. But it failed to do so because of rough sea. The fishers have been hospitalized in Erasama near Paradip, said revenue minister Patro.

Alekha Swain of Japa was at home with his two sons when the cyclone struck on Saturday night.  His house fell apart and the entire house  became unsteady. Swain  ran to a neighbour’s house and saved his life.

About 2,000 people in the seaside village of Khairnashi managed to save themselves by taking refuge in a cyclone shelter. “But the shelter has no amenities and forced many persons to defecate in the shelter. My daughter is in discomfort, but what to do? I need to ensure our security first. The storm came and went; all I need now is a safe latrine for my daughter and me,” said Narahari Jena, resident of the village.