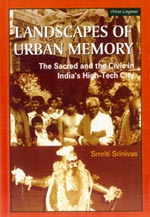 Smriti Srinivas' book is an excellent commentary on the performative intent of the Karaga jatre, an annual ritual in Bangalore. It is rituals like these that have shaped the city's evolution and now confront its location as a globalised setting. The city as it is now is a product of modern planning, totally destructive to the urban environment. It is this emphasis on the role of multiple elements -- culture, ritual, and politics -- in shaping the city as well as the regional natural systems that make this book a fascinating read.

The Karaga jatre is a nine-day ritual of the Vahnikula Kshatriyas -- a caste of Bangalore horticulturists. The ritual, which takes place in the month of March or April, culminates in a procession wherein goddess Draupadi weds Arjuna -- one of the Pandava brothers in the epic Mahabarata. In the ceremony, a priest is clothed in a wedding sari and made to carry an earthen pot, symbolising Draupadi's shakti (power). The ceremony culminates with the priest and the shakti conjoining to become a single unit.

As the Introduction points out, "the festival also bore a carnivalesque spirit and certain kinds of inversions were visible: the goddess was a man in woman's clothing, and the city, a bustling industrial and software metropolis, became a fairground." For the Vahnikula kshatriyas, the ritual has a broader contemporary significance: as Bangalore changes character from a garden city to a software metropolis, it is an occasion for articulating collective memory of a lost world. The Vahnikula's loss is just one amongst the many losses that have taken place after Bangalore has morphed into a hi-tech city. Srinivas uses this loss to posit her arguments for a better understanding of cities and their natural environments. Complex cultural links and dynamics -- aspects ignored while fashioning the global investment hub -- play an important role in her argument. In the process, she advances a new understanding of the city, which goes beyond advancing its conventional utilitarian value.

Such an understanding of Bangalore becomes all the more necessary, because the city has suffered tremendous environmental losses in its attempt to accommodate the transformations related to how the city's planners have imagined the city -- at one time, the hub of public sector industry and now, it. Prized wetlands yielded place to real-estate endeavours; trees were felled to widen roads and accommodate flyovers and urban greenery was reduced to a slim 'green belt', thereby reducing environment to a form of real-estate with little systemic value.

This transformation has caused maximum harm to horticulturists such as the Vahnikula kshatriyas. The community also lacks the political influence to atone for its loss. Even though the Vahnikulas are well represented in the Bangalore City Corporation, they lack clout in the more influential development organisations -- the bda, the Karnataka Urban Infrastructure Development and Finance Corporation. Amidst such economic and political deprivation, the Karaga ritual becomes more than a nostalgic occasion for a lost world. Instead, the ritual gives symbolic strength to the Vahnikula claim for compensation for their lost grounds. As Srinivas points out, "The intersection between the study of performance, topography, ritual processes, and political formation may therefore be the domain in which lies a deeper understanding of the civic in the contemporary city."

An important contribution of the book is that its conceptual framework is widely applicable to other cities across time. The Bangalore case shows how contemporary projects -- Miss World contests, the building up of massive sports stadia, and mega projects funded by the Asian Development Bank -- hack at the very roots of a city. Complementing the flyovers, and massive bpo office complexes of granite and reflective glass, are the new-age god men whose appetite for mass-following match the vastness of the urban territory seemingly at their command. These modern day gurus are harbingers of rituals which coexist uneasily with traditional rituals such as the Karaga jatre. The author would have, however, done well to spare a thought for the possible solutions for reviving community claims. Nevertheless, Landscapes of Urban Memory remains an engaging read.