G Nammalvar, the agriculture scientist who pioneered organic farming movement in Tamil Nadu, passed away on December 30 at the age of 75. He reached out to the scientists' community and farmers with equal ease, speaking in simple language to shed light on organic way of growing food crops and the dangers posed by genetically engineered crops. Born at Elangadu village in Thanjavur district in 1938, Nammalvar served briefly in the Agricultural Regional Research Centre in Kovilpatty. Of late he was spearheading a campaign against proposed methane project in Cauvery delta districts 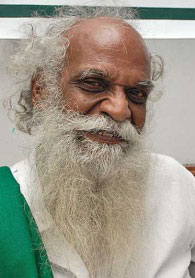 As 2013 bade us goodbye, Dr Nammalwar, you also tragically chose to say goodbye to us. While 2014 will replace 2013, who will replace you Ayya? Your saintly demeanour, your passionate bonding with Mother Earth and your incisive knowledge of plant science, your ability to speak with great depth using the simplest of languages and phrases, your turn of phrases that could touch the heart of the smallest person and shed light for the biggest of scientists—each of these could have made any person a great man. But you carried all these qualities so lightly on your frail shoulders and in your simplicity made even people like me see the light in ecological ways of dealing with food, farming and nature. I was one of the thousands of people whose paths you lit up with your smile and knowledge.

I am devastated with your parting Thalaivar. I can't see anyone replacing you to lead the organic movement in India. The new crop of traders of organic goods who pose as leaders of organic movement are not even a patch on you. In fact, they are destroying the spiritual values you had imbued the organic movement with by their focus on monetary gains and losses. All organic farmers and activists are orphaned today and it will take decades to fill the void you have left. At the Millet Network of India (MINI), we are doubly orphaned, Thalaivar. Many people do not know that you were the co-founder of MINI. Years ago in 1999, at the BioDevastation II meet at Aurobindo Ashram in New Delhi we had talked to each other about the marginalisation of millets. And when I said we should start a millet network, with your beatific smile, you gave your nod. A couple of years later when this thought was realised, you came to Pastapur village (in Andhra Pradesh's Medak district) to inaugurate the network with a few peasant millet farming women of Deccan Development Society (DDS). Could we have, even in our dreams, thought that millet movement would be so widespread in India within a few years? And that it will signal a revolutionary change in India's public distribution system (PDS) policy by allowing distribution of millets along with other grains under it? And that the movement started along with you in the tiny village of Pastapur would spread across the continents to West Africa?

Behind all these, your blessings and encouraging smile always gave us a quiet confidence that we can bring about a revolution under your benign gaze. But the defining moment for me in our long innings together was the moments we spent in a ramshackle Chennai lodge when you had declared a short halt to your tour of Tamil Nadu to fight against genetically engineered (GE) crops. To see you in your advancing age and frail health take a long tour, moving in an apology of a van, visiting village after village to spread the message of organics and waking people up against GE crops was an emotional moment. The folk sayings you used to spread your knowledge will also stay with me for a long time; "the top is for humans, middle is for animals and the bottom is for the earth" was a famous saying you used repeatedly to convey that millets are used to feed the humans (top), middle (the stalk) for animals while the roots (bottom) are left for Mother Earth to feed on. And with such sayings you conveyed the spiritual essence of ecological farming. And when you are gone, there will be very few left who can talk with such profoundness, depth and simplicity.

Au revoir organic saint-warrior. Reach God's abode which you created here on earth in your Vanagam (NGO founded by Nammalvar for giving training in organic farming). There in the paradise, your Vanagam will be a permanent abode for nature.

P V Satheesh is a founder member of Deccan Development Society (DDS), a grassroots organisation working in villages with women’s groups in Medak district of Andhra Pradesh. He has been one of the important spokespersons for the civil society in India on the issues of gender and food security, ecological agriculture and genetic engineering in agriculture