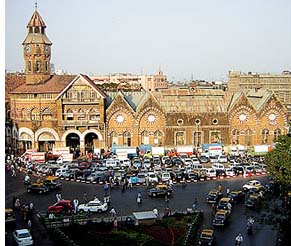 the majestic image you see on the right is going to fade away. The Crawford market in south Mumbai is going to be "redeveloped". On March 10, amid strong protests from heritage activists, majority of the elected corporators in Mumbai approved the contentious Crawford market redevelopment plan.

The municipality refused to hold any dialogue on it. The corporators turned down a suggestion by the mayor to discuss the plan, saying it was cleared in September 2007 and needed no further deliberation. While members of the Nationalist Congress Party and the Samajwadi Party demanded a debate, the Shiv Sena-BJP corporators opposed the move. The Congress was silent.

Heritage activists and civil rights groups have termed the decision "one of the biggest failures of democracy". "In spite of our briefing the members about the risks of the builder-driven redevelopment plan, they have refused to reconsider it.We strongly feel the political parties are aiming at the general election due next year. Builders and tenants are a good source of funds," says Surendra Srivastava, spokesperson of the ngo, Lok Satta Movement, Mumbai.

ngos cite several problems with the plan. The first among them is the faulty market redevelopment policy of the corporation. It was framed in 2002 and adopted in 2005. It says 70 per cent of the shop-tenants in a market can choose a private builder for redevelopment. The builder will get a floor space index (fsi) of four-- fsi is the ratio of the total floor area of buildings to the size of the land of the location. After development, the builder hands over the shops to tenants who become the new 'owners'.

In Crawford, 70 per cent of the tenants have chosen a private company, rna Builders' East and West Developers. "The market is on government land. How can any private builder hand it over to tenants and make them owners?" asks Srivastava. Shailesh Gandhi, Mumbai-based social activist has dug out official documents which show the builder will make a whopping profit of over Rs 1,000 crore by selling his share in the market's developed land in the free market. "How can a builder sell public land in free market and enjoy profits? This policy is absurd and needs to be amended. If at all, it is the corporation that should redevelop markets," says Srivastava.

The market's heritage status is also a hot issue. "The market is about 140 years old and lies within the 500-metre buffer zone of the Chhatrapati Shivaji Terminus, a unesco heritage site. "How can the authorities allow a builder to cash in on a heritage site? If this plan is allowed, it will also affect over 100 similar markets in Mumbai," says Nayana Kathpalia, co-convener of CitiSpace, a Mumbai-based ngo.

Under the plan, the builder will raze 11 structures in the market and build two high-rises. The heritage structure will be spared but the towers will stand close to them. Experts are terming this an architectural nightmare. Activists demand authorities to adopt the alternative plan by conservation architect Abha Narain Lambah. "In August 2007, the corporation asked Lambah to prepare a restoration plan for the structure and the market around it. She submitted the plan in September 2007. "The corporators, however, hurriedly cleared the plan that favours private builders on September 11," says Kathpalia. The activists plan to approach the district commissioner and the state chief minister to save the historic market.